I painted late away from my house and that makes it a late night. That being, I’m keeping the writing to a minimum today. The first two of the day were painted in very bright light and the light was like that all day. Until the end of the day when the last two were painted. I painted both of them standing in the same spot, turning around to paint the second one. 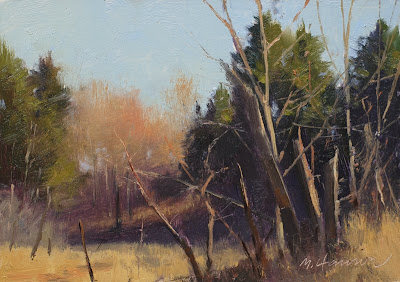 “Pine Point Morning” oil, 5x7 © Marc R. Hanson 2009
This is the same pond that the ‘Backlit Bugs’ piece was painted at but in the morning vs the evening. 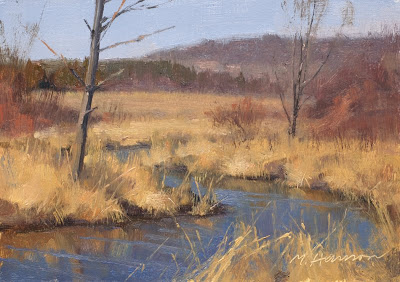 “Blue Reflected” oil, 5x7 © Marc R. Hanson 2009
Easily the most difficult light that I’ve painted in during this series. similar to the hay wagon painting, very bright and flat. The color scheme on this one was so intense that I had to go against my reaction to it and paint it less than I thought it was in order to keep it tamed. Otherwise the blue would have run amuck and been too much to look at. This is a complimentary color scheme and is very much like painting full color in the fall. Very tough on one’s sense of what it should be. 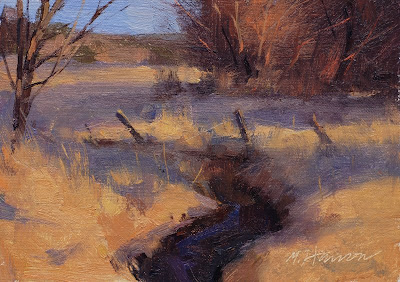 “South Of Road” oil, 5x7 © Marc R. Hanson 2009
Both this painting and the next one are more color studies than completely buttoned up paintings. The light was moving so fast that it didn’t allow time for more than a broad statement. A more emotional statement really. Nice little stream working it’s way through the dead grasses. But the color of the shadows on the grasses contrasted with the color of the grasses was all it took to make this my third for the day. Painted very fast and without adding any more than necessary. 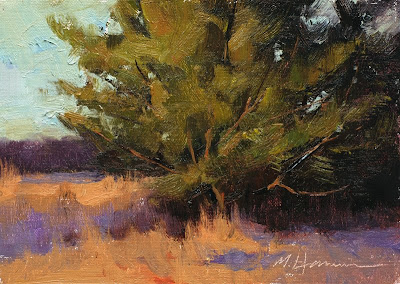 “North Of Road” oil, 5x7 2009
I only had about 45 minutes of light when I finished the previous painting. So I just did a 180 degree turn about and painted what was on the other side of the road from the little stream. Fortunately the light was so rich that it could have been anything and it would have been interesting to paint. Having this there was even better.
Posted by Marc R. Hanson at 11:15 PM

Lovely to look at again. Thanks for the insights into the whys and wherefores, little tutoring for us that don't get out as often to paint.

I'm following your marathon with great interest. Thanks for sharing your experience and comments. Do you do a value sketch first or just jump into the painting? Your work seems so carefully composed that I can't believe you just start putting paint on the canvas.

Beautiful paintings Marc. Glad that I took one of your workshops before you became "famous" on your blog for painting four paintings a day ... glad you are having fun!

Fantastic! I am really enjoying your marathon series. The violet shadows are beautiful.

I have been following your marathon daily...I have not posted till today! These are especially beautiful and I am eager to see more. Man...gotta take a workshop with you...super work!

My pleasure Jo. Thank you. Just paint, no matter where, what or how. That's what counts. :-)

Hi Paul, welcome. I jump right in. I pre-plan the entire painting, visualization is the right term, while setting up the gear and getting ready to paint. I've done a lot of thumbs in the past and think that it's still a good idea and in a slower paced time than this, I use them often. I have a small sketch book and drawing implements in the painting bag at all times for that reason.
However, I use a pretty fluid( not wet, changeable) beginning lay in. I don't start applying finish paint strokes until I'm comfortable with placement of the major shapes and lines of movement.

Well hello Leslie! I don't know about the famous thing. That's not my interest, but fun is! And I'm having a BLAST. I've mentioned before, this is a completely selfish act and I'm going for every drop of it. :)
Thanks again...

Thanks Craig. I couldn't believe how cool and blue those shadows were yesterday. Today they were a much grayer color, almost green. These are the things that make painting soooo interesting to do. Who else but people who paint would ever pay enough attention to these things. And why would or should anyone who doesn't paint?

Hi Teresa... Thank you very much.