Today’s theme is.... WIND!!! Gusts today pushing 35mph and sustained winds around 20 or so made the theme for the day a no brainer. I think that they were higher than that. I had laid my plastic lure box with about 15 large oil paint tubes in it on the gravel and the wind blew it about 2 feet across it. That’s a wind.

First, this eagle nest is just outside of town. Today the male was patrolling the grounds around the nest and seemed to be out intercepting a wandering Sandhill Crane. I took a lot of photos of this, one of the many marvels of nature that I encounter every day. 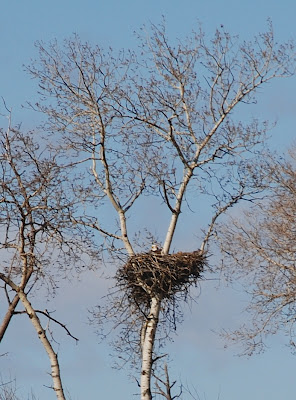 “Flailing Flags, Dancing Leaves” oil 5x7 © Marc R. Hanson 2009
This is a playful painting. My attempt at painting my impression of what it was like to watch the US flag and the Minnesota state flag almost being whipped to shreds before my very eyes. They were whipping in ways that even a shutter speed of 2000 or more would have had a hard time stopping the action of. 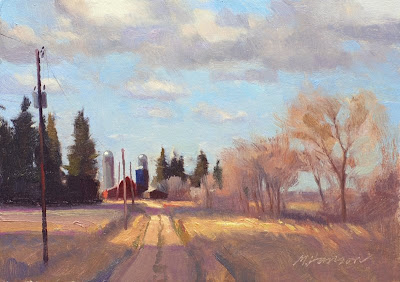 “Shelter From The Wind” oil 5x7 © Marc R. Hanson 2009
Even the big old spruce were moving to the beat today! It’s obvious that farms are planned to be in a sheltered position from the prevailing winds. Or at least as time passes, the plantings are made to make that a reality. This one probably had a pretty calm center yard area with chickens busily enjoying the nice sunshine of the day. Meanwhile I was grappling with an easel that wanted to take off into the wild blue yonder! 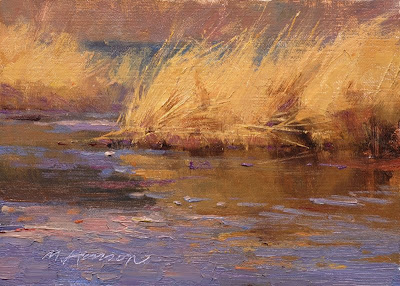 “Wind Shear” oil 5x7 © Marc R. Hanson 2009
I wandered into the Interstate Park, Wisconsin side, after lunch to see if it was calmer in there. Was a little. I found this edge of grasses on the water’s edge and decided to focus in on it. 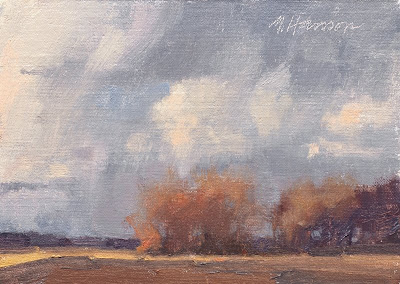 “Virga” oil 5x7 © Marc R. Hanson 2009
Virga is rain falling from clouds that never reaches the ground. I was in the middle of a potential torrential rainfall but because the wind and dry air near the earth’s surface caused any falling moisture to evaporate before hitting ‘me’, all I had to do was hold onto the side of my truck, easel and hat and paint like a mad man! No Problem!!!
Posted by Marc R. Hanson at 9:01 PM

Ahh the challenges of an out doors painter...

Hey, I just had a thought! You could make this into a Tv series. I'm sure many people would be interested in watching a 30min show about your painting exploits. I know I would. Something for the next project! :-)

Hi Marc, I was going to ask you how to paint in high winds but your last comments answered that, I just need a truck to hold onto.

Selfishly I'm glad you workshop is over so that I can view more of your excellent paintings. I'll be sorry when this month is over.

Flags and Leaves painting is right up there with Fluff!!! Really enjoyed that.

Marc-- I am so enjoying your blog and paintings this month. You must feel totally bushed by the time you rap up the brushes at the end of your day. Your stamina is really admirable. And as Debi says, love the flags!
Margie

I have immense admiration for all of the work you are doing!! It is all beautiful and your commitment to this challenge is unflagging!! Speaking of flags...WOW...Childe Hassam has/had nothing on you! Keep up the terrific work..we in the blogosphere are cheering you on!

Hey Eugene... Not enough sex, drugs or rock 'n' roll for a successful video! I could go to work on that for a future project though... :-)

Hi Susan. Hang on tight! Or just wait, if you haven't committed to a "project", until the wind die down. Thanks for your comments. I'm not sure what to do when it's over...????

Thanks Margie. Yes, I have found new reserves of energy and 'keep at it' ness during this project.
I would say though that I work at staying able to do this kind of thing. I always have.

Thank you Theresa! I know, hear and see the support and it means the 'WORLD' to me! I get so many emails of support, encouraging me to "keep going" and all. I'm really lucky. This is so easy to do, to paint this much. The hard part is the technical side of it. I could paint all day every day for the rest of my life and be happy as a clam.

Again, this challenge you set for yourself is wonderful. Wow... oh I already said that. You are great to share it with us. Shelter from the Wind is another favorite. I love the red barns and spots of color.

CJ's is great on April 22. Congratulations on the show in Santa Fe.

Forgot to mention how much I love the flags. We lived out of the country and it is so special to see the flag at the Embassy or at a school, etc. Thank you.

I agree with Theresa-your commitment, prolific output, and absolutely gorgeous paintings are thoroughly inspiring. Am in awe.

Love the flags and wind!