Hello, it’s me again! My newsletter is back on track. I’m sorry that it was not sent over the last four days, but sometimes things are just out of your control and you just have to grin and bear it. If you’d like to see the past four days of newsletters, visit my blog, Painting My Way Through Life.

Today dawned as a cold, gray, windy one. That lasted for at least half of the day but towards the end, the winds calmed down and the sun gave a little bit of warmth to my bones. I’ve had the greatest wildlife experiences this month. I’ve seen almost everything with fur or feathers performing a courtship display, eagles on the nest now with eaglets, muskrat ‘love’ (their little whistling/squeaking chase around the pond), and today a fox family, mom and about 4 or 5 kits chasing each other around an old hay barn. If this wasn’t Minnesota, I’d swear I’m in South Dakota for all of the pheasants I’ve seen. Very, very cool. 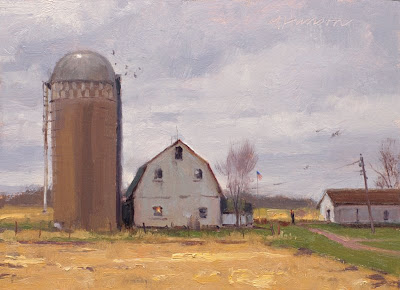 “A Minnesota Farm” oil 5x7 © Marc R. Hanson 2009
This is so typical that it wins the title! Right off of the road for my pleasure. I met a little beagle while painting this, don’t know his name, but he sure liked my easel and truck. 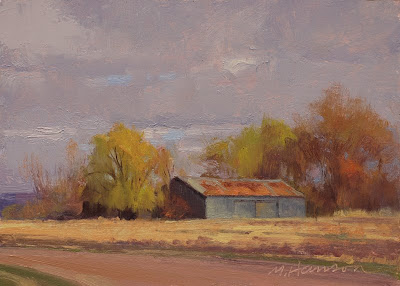 “Old Hangar” oil 5x7 © Marc R. Hanson 2009
Lot’s of farmers used to have an airplane on the farm. That was when an airplane could be purchased for a few thousand dollars. Not anymore. The pasture in front of this was probably an airstrip at one time for a Cub or small Cessna. If it was my land and hangar, it’d have one in it still, I hope. 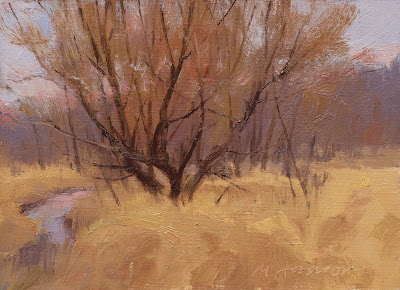 “Black Willow” oil 5x7 © Marc R. Hanson 2009
I think that this is actually a black willow, but would need to get the tree book out to be sure. The title refers to how dark it was against all of that grass and cool gray background. I was going to call it Blue Wing Teal because two pair of them were in the little stream doing their own courtship ritual of bobbing heads and little two or three note whistles followed by the males bashing wings and beaks with each other. 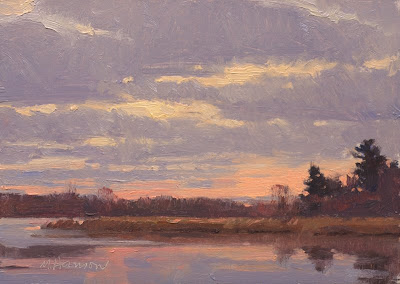 “Tranquil Little Lake” oil 5x7 Marc R. Hanson 2009
Sometimes at the end of my day, following a bout with the weather gods, it’s nice to paint something that is calming. This is one of those places, Little Lake. I’ve done a couple of this place and will probably do more in the years to come.
Posted by Marc R. Hanson at 10:28 PM

I like the last one best for the way you captured the light. Especially tricky since it was obviously fading.
But I also like the touch of the little light in the window of the barn in the first one, very nice touch. I still marvel at your drawing skills in such a small format.

While all are very nice that last one took my breath away. You have to do more from this location, Marc! It has been a pleasure to follow you on this painting journey!

LOVE the "Old Hangar" one.

Thank you Jala. You know, I got a lot of email about that one, others liked it too. That caught me by surprise. But that happens often. Says a lot about 'just painting' for yourself, not for any other reason. I could never try to out guess what people will like. Better to just paint what is of interest and let the chips fall...

Thanks Donna. Went out there tonight, but the light was too bright and the wind was up. It's a better place when the lake is calm. I can't wait for the summer when it's humid, maybe overcast and calm.

Kitty referred me to your painting marathon and WOW! Love the last one especially...it's the light in the sky that gets me goin'.
Thanks for sharing your hard labor!