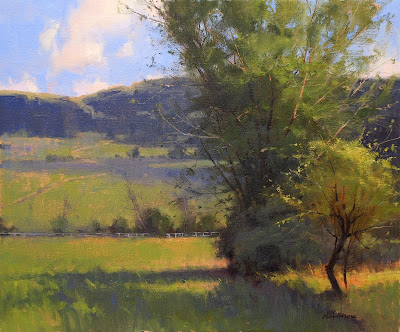 I'm also proud to announce that I am now showing in two new galleries. They are-

One of these was painted in the studio last week during a rain day, the other outside yesterday immersed in another rain day followed by some finish on it today.

Even simply starting the larger paintings outside is so much better than not being outside at all to paint them. The piece 'Hovering' is one of those exceptions. A quick pull over along the highway to capture on pixels a fleeting few moments that are then recalled in the studio is necessary too. Truthfully, I have more fun being frustrated on site than making an acceptable painting inside from any sort of reference. Good thing it's my world or someone would tell me that I'm not allowed to have fun doing this and make me come back inside!!! 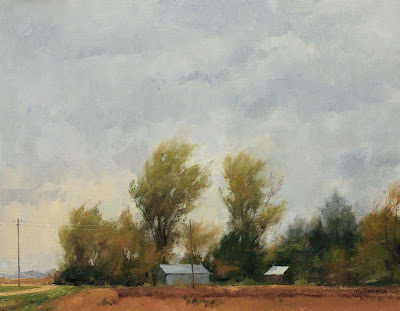 'Impending Change' oil, 14x18 © Marc R. Hanson '09
This was painted about 75% on site yesterday before the rain was so bad that I was afraid that it would ruin the board this is on, not to mention that my paintbox was acting as a water reservoir. I'm getting more and more interested in how brushstrokes can be used to depict the 'point' that you want to make. I don't mean a similar brush movement all throughout, ie, little swirling strokes no matter if you're painting grass or hard metal, but strokes that indicate movement up, down, sideways, diagonally, and strokes that indicate texture. Anyway, I was thinking of the 25kt winds that were gusting while painting this one. 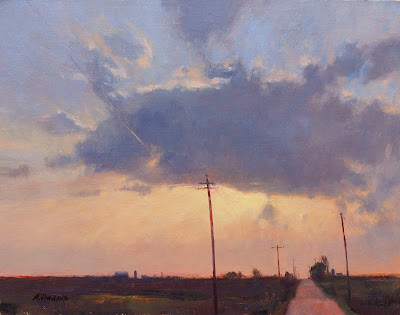 'Hovering' oil, 11x14 © Marc R. Hanson '09
Like I said, I saw this on my way to teach a workshop a week and a half ago in Zumbrota, MN. As you drive south of where I live now towards Rochester, the landscape flattens out into rolling hills that don't seem like hills. It opens up the sky view, you can see huge distances, like being in the prairie regions of the country. There wasn't a cloud near me except for this one very large 'blimp-like' cloud that was blocking out the rising sun. I'm probably going to explore this more and end up doing a very large painting based on it. Don't know if the color will be the same, this was an idea study of that concept.
(And yes, the telephone poles in windy country do bend eventually as are the trees shaped into 'wind vanes' by prevailing winds. Plus the poles warp... the less interesting explanation.)
Posted by Marc R. Hanson at 3:52 PM 21 comments: