I just read a spectacular post from Lori McNee's 'Fine Art Tips' blog about how to give your blog post more artistic sex appeal. Her blog article is very good, full of wonderful tips and ideas. When I get the time I'm going to implement as much of what she suggests to do as possible.

Until then... I thought I'd start with this, an incredibly talented artist... the late Marvin Gaye! :)

An unexpected need for a new painting for a deadline came up on Monday. The deadline is tonight at 11:59pm. I made it. This was a very quickly painted painting. One of the things about taking your time is that you have the opportunity to sit back and look at the painting to be sure that you haven't made any big goofs. I don't have that luxury with this one, so I am hoping that my choices were right because there's no time left to wiggle things around. This has been quite the adrenaline rush for a couple of days. Happy to be over it. 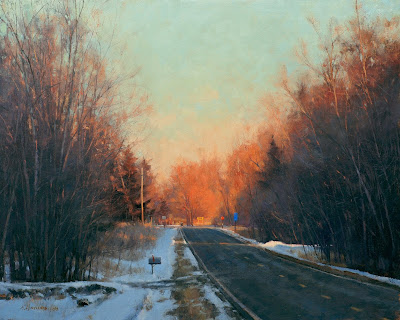 Today was a study in controlling close values. We are going through a big thaw right now and there is a huge amount of moisture in the air. Temps were up into the high 40's at least. Nice to be out. 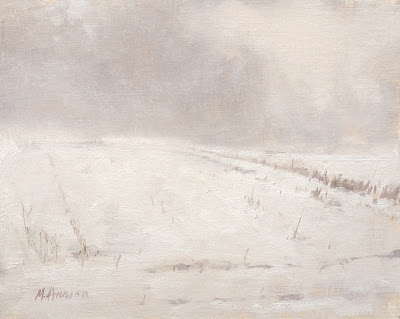 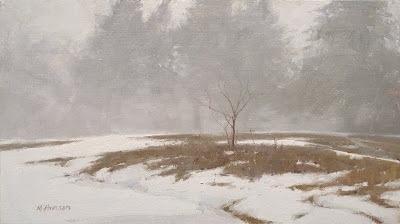 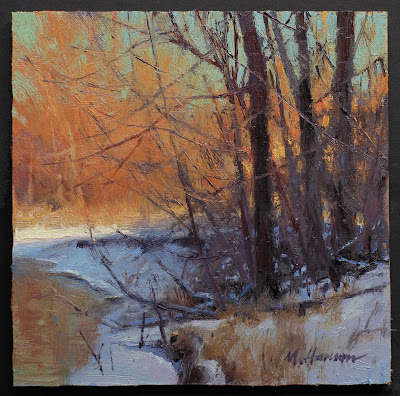 'Shadow Bank' - oil 6x6 © Marc R. Hanson '11
This is another little 6x6 for entry into the California show at Randy Higbee Gallery. Painted this one from some winter river reference. Just a little tangle of scrubby trees and a bank that caught my eye for it's color. Thanks.
Posted by Marc R. Hanson at 4:56 PM 10 comments: 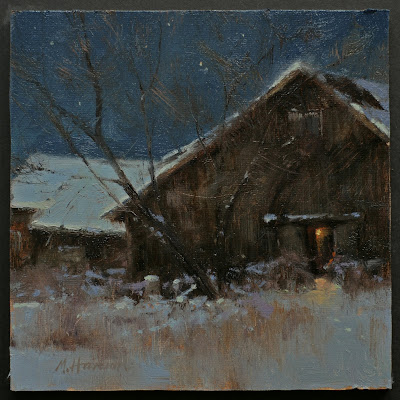 These are some little 6"x6" paintings that I'm doing to enter into a show called '6" Squared' that is being put on by the Randy Higbee Gallery in Costa Mesa, CA in March. They're good to do for a few reasons, one if they get into the show, that will be good, but also because I find them to be a good way to experiment with ideas, color, paint application and all of the other 'art' tools I have. If one works you learn something to use in the future, if one doesn't you usually learn even more. Thanks for looking. 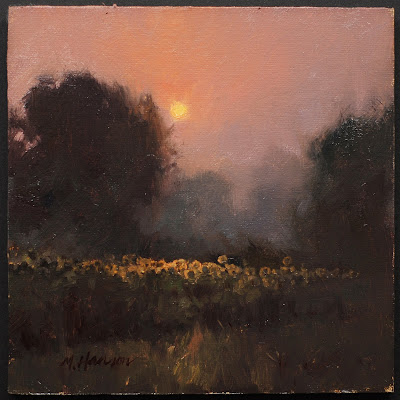 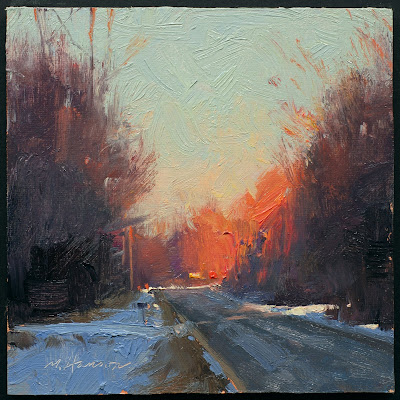 With the temps up around +30ºF... it was the day to get outside and paint. I wish it were that temp with sun, but at this time of year warm usually means overcast and moisture. The morning was stunning with everything covered in a frost from the fog that formed the night before. I was really pumped to paint that.

Leaving my tripod home and not realizing it until I'd driven 20 miles to paint, and then back home to get it, cut down on my paint time. When I finally retrieved the tripod instead of making that same drive back, I wandered just outside of town and found my subject, one that I've painted in the past in different seasons. It's a neat little fenceline mixed with growth of all kinds for variety.

The first painting is a 12x24 and the second painting is a 14x18. Both of these took a little extra time, hence cold toes. I didn't wear the Arctic rated boots because it wasn't that cold out. But it was cold enough to make a warm up before heading out for number two and a stop at Olive's in Marine for a glass of wine and a pizza following the second one, just the medicine needed. 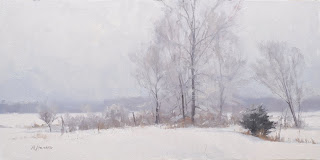 "Frostline" - oil on primed panel - 12x24 © Marc R. Hanson '11
I used a horizontal format on this one because of the subject and theme of the painting, it required it. I also painted this on an acrylic primed MDF panel because I wanted the paint to have a more opaque look and this kind of panel is best for that end result. I wanted it opaque because the color was so close in value, all in the upper range of the value scale, and as I saw it... very opaque. There was very little transparency to the light and the subject. When I see this happen, I use the materials in my arsenal to bring about that concept/effect as efficiently as possible. I had great fun painting this one. 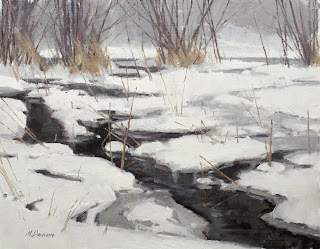 "Rivulets" - oil on linen panel - 14x18 - © Marc R. Hanson '11
For the afternoon painting I wanted some water in the painting that wasn't frozen, like a stream with the snow banks along it to paint. I didn't find that, but while driving around down near Square Lake in between Stillwater and Marine on St. Croix, I found this low lying marshy area that had a plethora of little runs of water, ice and hummocks of snow along with the willows and grasses in the background and a few errant cattails hanging around. Seemed complicated, but it was so nice that I decided to go to work on it. By now the frost was gone and the light was about as flat as it could be, almost no indication of shadow anywhere. It was as pure a white on the snow as you'll see in the winter. However, when I began to analyze that, I could see that although the white of the snow was a 'colorless' gray of a very light value, it was not white! To mix it I added just a touch of blue, red and yellow to bring the spectrum to the light gray mixture in the snow. The darks were Very dark against that very light value creating a wonderful effect to paint. This one took awhile and by the time I was done it was time to head down the hill to Olive's for wood fired pizza in Marine... and a glass of Pinot Noir!!!
Posted by Marc R. Hanson at 9:19 AM 17 comments: