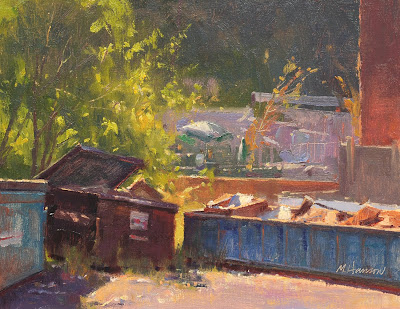 'Behind Schoony's' - oil - 11x14 © Marc R. Hanson '08
I'm putting this one into a show, the OPM (Outdoor Painters of Minnesota) show, so decided to photograph it and post. It was painted in Taylors Falls a few weeks ago while out with my painting partner Kami. We found the back of Schoony's Ice Cream Parlor to be just right on a bright warm August afternoon. The ground was very uneven and I found the arrangement of tilting dumpsters interesting. Very nice light that day.
Posted by Marc R. Hanson at 9:42 AM 12 comments: 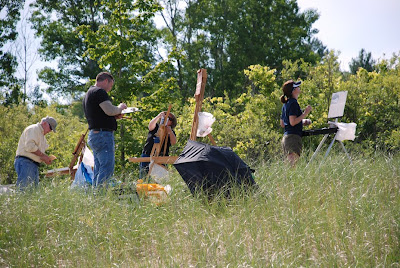 This is the time of year that I begin to schedule workshops for the next year...2009. If your painting group, or just you and your painting buds, are interested in arranging a workshop next year, please feel free to email me at paintbox1@frontiernet.net.
I would be glad to email a fee schedule that explains it all, or most all of it. Can't explain weather! The calendar is tricky so I like to start early so that wires aren't crossed. Thanks.
Marc
Posted by Marc R. Hanson at 9:01 AM No comments:

I spent last week in New Philadelphia, OH teaching a workshop for members of the Ohio Plein Air Society (OPAS) and judging two shows on Sunday for them. One show was for a two day paintout, the other for a 'quickdraw' event that afternoon. I'll say it right now, and this is what I find every time I go to teach painters, I am soooooo lucky to do this. Paint...yes, but the teaching brings me into contact with truly good people each and every time. We had a blast in OHIO and I have made new friendships that will enrich my life for years to come. I'm also going to say that this Ohio group is as enthusiastic a bunch of painters as I've run into. Not to 'dis' anyone else, but Ohio is a big state and the painters came from all four corners, and Indiana, to attend my class and/or to attend the paintout. I want to congratulate all of the operational members who might read this, and those who won't, on an incredibly well run organization. I was treated Very well by the group and it was greatly appreciated, guaranteed. Thank you to OPAS and all of you who I met and painted with. 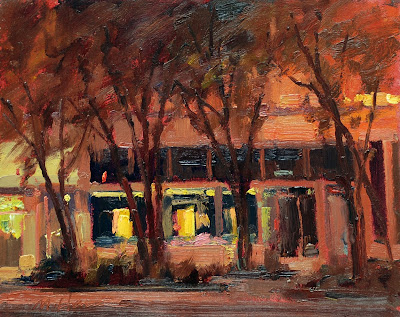 The first day of class I put them to work with my 'Color to Value' exercise. Anyone who's been in my workshops in the last few years will know what that is. I think most students in the workshops find it to be a challenge and that it is educational and an eye opener for them. Following the first day I had agreed to demonstrate a nocturne for the group. We decided that this would be the night as it was warm and nearly perfect. It went well, I think. This is one fourth of the town square's plaza. A department store window lit from outside and in. Funny how many people love to use flash photography while a painter is painting in the dark! I have decided that no matter how I try to impress upon the students just what that does to my eyes while painting a nocturne, it's no use! They are going to try to blind me every time. :) We had fun with that. Following my demo there ended up being about 8 or 9 painters who decided to give it a shot. That was satisfying to see. They were painting until about 11:00 PM.

I should mention that the night before I arrived Hurricane Ike shut down large areas of Ohio's electric grid, knocked down many, many trees and did a lot of damage to peoples houses. We had a few people not able to make the workshop due to roof damage and no power for days. I hope they've all gotten help by now, I know a lot of the power was being restored by the time I left for home. 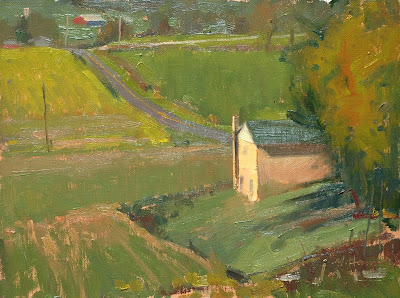 The demo this morning dealt with making correct color notes with a minimum attention to extraneous detail in the sketch. We had just come off of the Color to Value study where shape, value, color, edges and composition are all treated as simply as is possible. The work on this day was designed to continue that idea when working in full color. NO finished paintings, but successful starts was the idea. We had to cram a lot into a 3 day workshop. 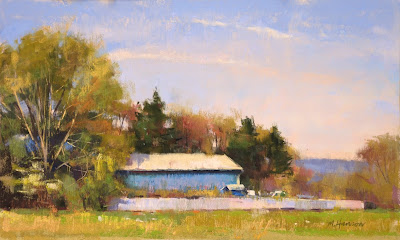 This pastel was painted on the last afternoon of the 3 day class. Only had one full time pastelist in the group, Ray Hassard, a very good one at that! Ray wrote an article about me for Create Better Paintings.com a few months ago and did a wonderful job. So this was for him. Actually there were a few people who occasionally use pastel and few who might try as a result of the demo. The shed was next to the property of Jon Browning, the OPAS president who made sure everything was in order for the workshop. He graciously let us use his family's farm for a couple of days of the class. This is probably done, but being pastel I'm likely to work a little on it. The color that day was a riot, loud and across the spectrum with fall beginning to show it's changing attitude. And I had so many people right behind me that it was tough to back away. As result I am going to take a good look at this over the next few days and see if it needs any adjusting. 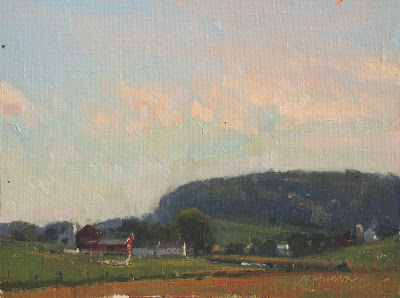 We were in the heart of Amish country, rolling forested hills dotted with very interesting farms and cultural subject matter. Anyone looking for somewhere in the midwest to paint who hasn't painted here should add it to the 'where to go?' list. There is no shortage of farms, pastoral views, winding country roads and small communities full of aging architectural subject matter.
Of course I was teaching so my 'free' time to paint was limited. I had more than the results show, but I was so enthralled with the little towns and farms that I spent a 'Lot' of time driving, looking and photographing. I wanted to soak it in and not miss what was around the next corner. And there was always something else of interest around that next bend in the road.

While I was painting this painting I met the nicest elderly Amish gentleman. He drove up in a little buggy pulled by a Shetland pony. As he approached me he said, "You know what they say, curiosity killed the cat!" He had a big grin on his face and we had a great conversation about the area. So happens that the farm on the right of this painting was his farm. He told me all about his neighbors, the land and area. As he left he paid me a huge compliment...he said, "I'd recognize that as my farm if I saw it hanging on a wall!" I guess I was successful. Thanks, till next time.
Posted by Marc R. Hanson at 9:32 PM 9 comments: 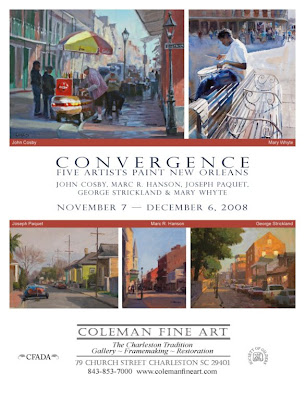 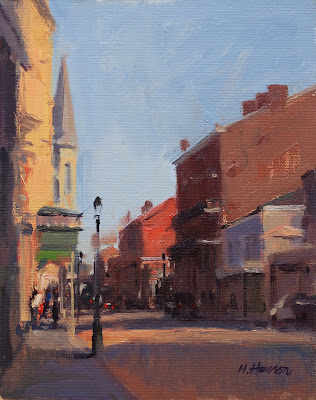 Well time keeps on 'slipping' away! I've been painting, a lot, but in the studio mostly in prep for the show in November at Coleman Fine Art in Charleston. I thought I'd post the most recent ad that they placed in American Art Collector, and a larger photo of the field study that is in the ad. This was the first painting I did in NOLA with Mary Whyte last February. I'm currently working on a 40x30 painting of a very rainy noon hour on the streets of the French Quarter. When I was there it really poured a couple of days and that left a pretty good impression on me.

Next week will find me in Ohio teaching a 3 day workshop and judging a plein air and quickdraw event for the OPAS (Ohio Plein Air Society). Can't wait to meet new painters and friends. Thanks for looking in.
Posted by Marc R. Hanson at 10:20 AM 5 comments: