We spent Friday afternoon from 11-3 doing some public demoing at our Salt Marsh Studio Holiday Open House.  Dottie worked on a larger sized 40x30 piece, I painted a 24x24 acrylic, start to finish, steps shown here.  I hope you enjoy... 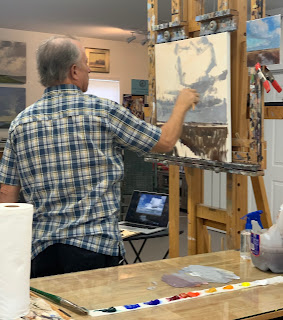 Starting it up! I have been painting with acrylic paints since my art school days... uhmmm... errr-rrrr... since the late 70's.  Since then my use of them has been sporadic at best.  I have this drive to keep on working with them until I find a way to be comfortable enough with the process to paint with them more frequently.  What I want out of them is to be able to be comfortable with them in a more painterly way.  So that's what I work on every time I get them off of the shelf.

I'm a huge admirer of the late Charles Movalli (1945-2016), even more so since finding out a couple of years ago that in the mid-90's he switched from oil paints to acrylics and never looked back.  All these years I thought that his work had been painted in oils, it has that kind of 'bravura' look to it, surface and brushwork.  That he could take the acrylic medium and paint those strong images is inspiring me to paint on with it.

When Golden 'Open' acrylics showed up I thought that they'd be the answer with their longer 'open' time, and they're a great paint to paint with!  You're able to work them longer, and they hold their value, from wet to dry, better than any other acrylics that I've tried.  What they lack is the ability to hold up brushstrokes like other 'heavy body' acrylics can, when they dry.  They tend to flatten out to the surface.  So I've been painting with several brands over the last few years... Holbein, Golden, W&N and Utrecht.  For this painting I chose to use the Utrecht, since they also hold their value quite well.  Painting on a stretched cotton canvas also helps as the depressions in the canvas helps to keep the evaporation down, delaying the setting up of the paints.

I have the acrylics set out on folded, wetted paper towels and occasionally mist with water.  They stay fluid and don't dry out for as long as the towels are wet, and you mist them from time to time.  I'm not using any medium on the painting, very little water mixed into it, just paint! 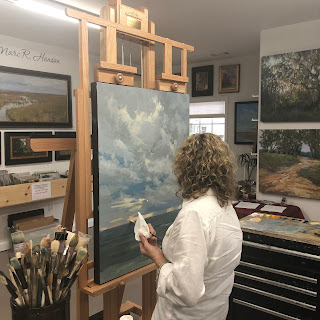 Dottie at work!  She has a beauty going... 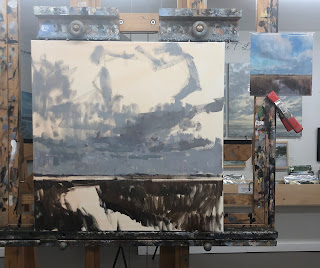 For reference I used a small study, and a photo of the scene, viewed on the computer.  Both were only starting points for the painting.  The color and composition was changed, even shapes of clouds in the sky, to meet my wants for the painting.  That's one of the things that I really appreciate about acrylics, the ability to change the image around, to be able to re-draw almost instantly, to mold it more closely to what my idea is for the painting.  That's possible with any medium, of course.  But with acrylic there's no scraping, wiping or working into wet paint.  Wait a few minutes and over paint! 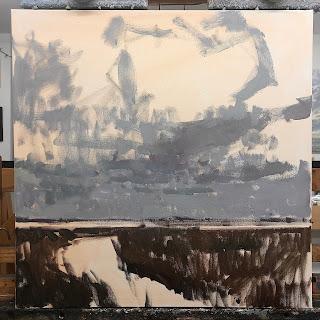 Block-in... this is about 30 minutes into the painting.  Just dividing up the land/sky, setting the value scale and comparison, for both. 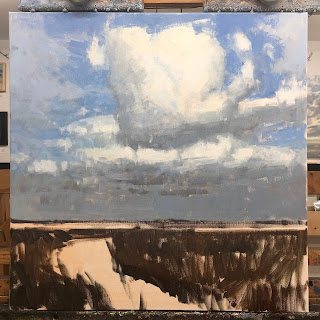 At this point I'm starting to build up the sky design, color and movement.  The main cloud takes the stage, so I kept cutting it down in size, molding it's shape and the movement around it until I had something that I wanted.  I'm an hour or so into it at this point.  We had visitors into the studio while all this was going on. 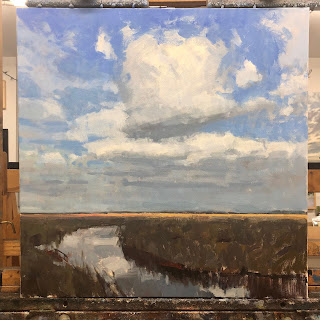 I've put color into the marsh grasses, the water, and changed the clouds again.  I'm pretty satisfied with the sky movement now.  I wanted the shape of the water to move up into the sky, follow sort of an 'S' around and up into the sky to the right, then circle back around and down to the marsh.  The little puffy vapor patches and clouds are intended to lead the eye around in that way. I found that just applying the acrylic straight off of the palette, without diluting it with water, helped to keep it fresh and alive.  Watering it down with either medium or water and medium, produces a weaker looking surface in my opinion.  Painting with it straight out of the tube is more interesting, and something that I'm going to keep on pursuing. 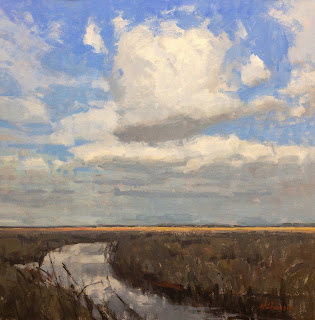 Final, for now.  Since it is so easy to work back into, next time I see this, I may alter some things, even though it's signed. Thanks for looking in.  I hope you enjoyed the little bit of a demo.

Some recent work for sale!

I'm sharing a selection some paintings that I have available through our studio, Salt Marsh Studio, on Whitemarsh Island, GA.  The honest truth for artists is that we paint so many paintings in a moth, year, over the years, that we inevitably have some paintings returned.  These are some of those pieces that have been sent to galleries on consignment, but for whatever reason, did not sell.

We just recently held a Holiday Open House.  These pieces are a selection of what I have hanging for it.  If you're in the area of Savannah, GA be sure to drop us a note to make an appointment to stop in to view the work on hand, and to say 'Hi'.  You can email me at marc@marchansonart.com.

Thanks for taking a look...

When it comes to blogging... "Don't say 'never', ever!"... is my motto!  As I type this the sound of crickets chirping along the blogging air waves are growing louder and louder.  That's alright... it's been a while but my other motto is... "You have to start somewhere to get anywhere".  That goes for almost everything that life presents as a challenge or opportunity, as interchangeably entangled as those two are.

About a year ago, or at least not very recently, I attempted to re-enter the blogging atmosphere via my FASO website's blogging platform.  While it has many features that might be more advanced than this one, I found it difficult to use in a fluid and fluent way.  Might be because I'm so comfortable with 'Blogger' from years of use?  Whatever the reason is, I'm back here to try this again.

Here's my story 'in brief' since my last post of any consequence, November 2016, that one being one of a couple of schizophrenic decisions about what I wanted to be doing with my time, what social media platforms I found most engaging and worth my time, and that I didn't like Instagram! I'm now fully engaged on Instagram, and for some strange reason have collected about 22.5K followers.  Instagram is where I practice being social, and benefit from it's huge vault of images and interests that I am engaged with. (More about salt water fly fishing and tying later, and about why that even means anything at all.) 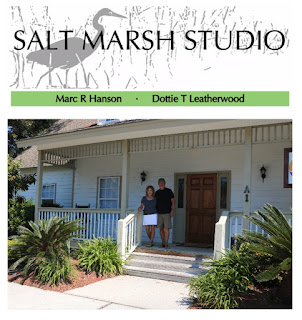 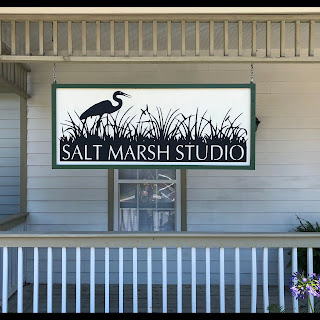 In the interest of not having a publishing company to handle the book that it would take to cover the last year and a half, this post will have to suffice.

I met the love of my life a year and a half ago, the beautiful Dottie T. Leatherwood who is also a very fine artist, many of you may be familiar with her, and we decided that having a life together was the best idea either one of us had... Ever.  We have had Lady Luck's gift of a lifetime handed to us.  So, I sold my home in Mississippi last Spring, we moved to Tybee Island, GA last Winter, set up Salt Marsh Studio on nearby Whitemarsh Island, and have just recently purchased a home on Tybee Island where we plan to stay FOREVER!  NO more Penske or Uhaul trucks for either one of us!!!  Dottie grew up in the Savannah area, it's home to her.  I love this part of the planet, the sea, the marshes, the wildlife, and fishing (posts about that to follow soon).  In short, we are both exactly where we want to be, painting and enjoying the life that surrounds us.  Thank you to whoever serendipitously lines these things up in our lives, We are grateful beyond words. There you go, that's brief! 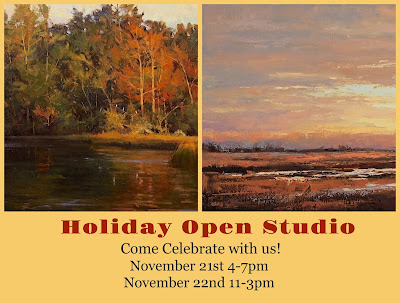 To cut to our art life, we've been working our tails off, not only with moving 3 households and studios in the last year, teaching, and painting for multiple shows near and far. All the while we're doing our best to get out into the marshes and onto the beaches on Tybee to capture it's beauty and mood in paint!  Neither of us would agree that we get to do that enough, but we're working on it.

To celebrate being in our studio this past year, we're going to have a 'Holiday Open Studio' on November 21st and November 22nd.  There will be paintings for sale, from small studies to large studio pieces, all will make great gifts for any art lover.  We'll have information about our newly published 2020 Salt Marsh Studio Workshop schedule, fresh off of the press!  More on that below.

Both Dottie and I have been teaching for quite awhile, and love the opportunity it affords us to get out  into nature with other painters to help them in their own efforts at capturing the beauty they see around them.  We love this area deeply, and find it to be an endless source of subject matter for working 'en plein air'.  Near us are vast expanses of tidal salt marshes, beaches, and the ever changing skies that stretch for as far as you can see in every direction.  We'll be team teaching this series of workshops this winter and spring.  We can't wait to greet and work with artists who are new to the area, or who have been here for some time.