Yesterday was a fine fall day up at Crex Meadow Wildlife Area in Grantsburg, WI. Gray skies, slight wind and the beginnings of Mother Nature's changing of her palette with which she paints our surroundings. The reds, oranges, yellows, warm greens and a variance of other warmer earth colors are all beginning to overtake the summer palette, except that the trees that border the bodies of water where the warmth of the water holds off some of the frost, are still holding onto their August green foliage.

The Painters soaking it all in before the day starts... Critical to seeing paintings.

I've mentioned that I've spent a fair amount of time up there, 30 miles north of me, painting now over the last few years. But this year I have really begun to concentrate on this jewel of a piece of earth. It's a place where a person can hike, bike, hunt, nature watch or paint without the fear of traffic or being told that "You can't paint there". You are free to wander anywhere that you please or dare, free to stop at any point on the many miles of gravel and dirt roads that spider web through the refuge and surrounding wildlife area. This is a real treat to have in the neighborhood and I plan to continue to make very good use of it.

Yesterday I contacted a several other painter friends in the area and 5 of us ended up making the trip up and spent the day painting. Mary Pettis, MaryAnn Cleary, Joni Jurek, Tony Hilscher and yours truly, all spent the entire day at our easels in front of the daunting but beautiful surroundings that Mother Nature offered up for our painting pleasure. We started the day with layers of long underwear, sweaters, coats and more but ended up shedding a lot of that by the end of he day. The ending was perfect, calm winds and balmy temps. This is one reason why we put up with the gnats and skeeters, wind, cold and other deterrents, to experience a day like we had outside from beginning to the end of the light... priceless! 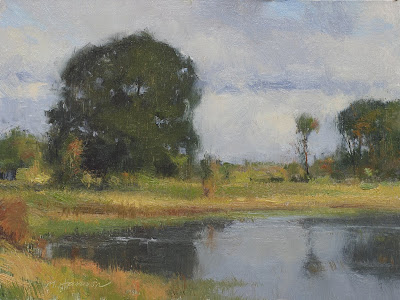 'COLD SKIES' 9x12 Oil ©2011 Marc R. Hanson
Crex is primarily a sedge marsh, flat vistas without much more to break the distant horizon other than the slight rise in the ground elevation or a distant line of trees that make up the upland habitats that surround parts of the area. It's the kind of a place where you're tempted to just paint skies all day long. That's fine, but I find myself investigating the little nooks at the edges of the marshes, the islands that have scrubby growth on them, the expanses of sedge and other aquatic vegetation that all go towards interesting compositional elements for my work and what I'm trying to say in the paintings. 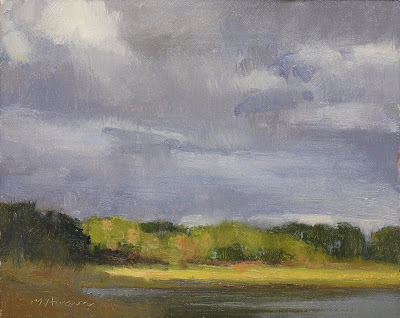 'A SLICE OF SUN' 8x10 Oil ©2011 Marc R. Hanson
Yeah it was chilly... and any sun that came out was welcome from both my physical and artistic sides. After painting the first one above I stayed right where I was and tried to grab this little happening across the pond. It didn't last long, a few minutes is all, but I tried to hold onto what I had seen and use the now overcast scene in front of me as the structural guide and my memory as the artistic guide. From here we took off for the north end of the park and the bathroom/picnic area for lunch. 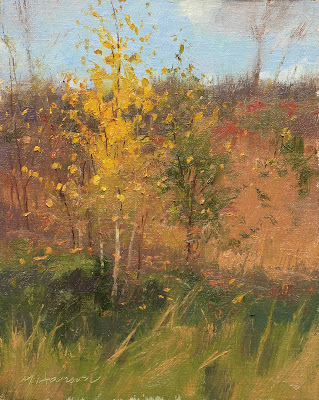 'NORTH END FALL' 10x8 Oil ©2011 Marc R. Hanson
On our way to my next suggested location, we were driving through one of the upland habitats that was just beautiful with a mix of birch, maples, oaks and all of the assorted vegetation, well on it's way towards peak color. I couldn't help it, I had to stop. I should mention that the others all had limited or no experience up here. I've driven 95% of the roads with the park map and marked painting locations on it. I'm pretty familiar with what the lay of the land is now. So I assumed the 'tour guide' status and felt responsible for putting us in nice painting locations. When we drove through this area we were on the way to another open water spot that I thought would be good, a Ducks Unlimited project that is just beautifully designed for the benefit of the waterfowl's use. Oh... it was also the opening day for the Wisconsin Waterfowl Season. I knew that spot would be good at the end of the day, so we all agreed to stop in this little upland spot and paint. 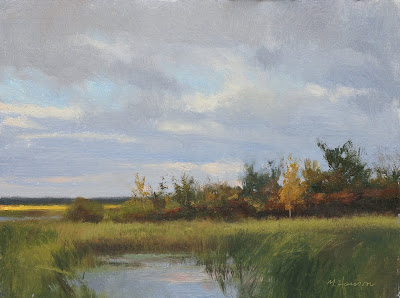 'END OF A SEPTEMBER DAY' 12x16 Oil ©2011 Marc R. Hanson
Of course you can't count on the weather to do anything that you expected it to do. It didn't, it was a lot more overcast all day long than we thought it would be according to the official weather sources we checked. But...we had sun at the end and were excited by what that late light was doing to the landscape. So we get to the spot, the D.U project marsh and it is lit up so nice that there are 5 drooling painters all biting at the bit to go at it. No sooner did we set up than the overcast closed in and cut off most all of the sunlight. Every once in awhile there would be a slash of light off in the distance on the sedges that spread out for hundreds of acres in front of us. Being seasoned painters we knew that we'd just have to make the best of it and went to work. I grabbed ahold of the darkened foreground in cooler light against that sliver of sun off in the distance and did my best to try to capture that sensation that I had when it happened.

So it was a good day with 4 paintings being painted. Came home hungry and tired and slept like a baby. A good day.
Posted by Marc R. Hanson at 10:35 AM 3 comments:

I really can't believe that my last post was early July! But then again it's been a crazy busy summer full of traveling to paint and teach. I have a pile of work to post here so rather than get into much detail about the last few months I'd rather show some of the images from the summer and talk about the recent past with them a little bit.

First of all... We, Sargent and I, have a new housemate. Her name is Frida. We rescued her at about 12 weeks. She's an adorable little sweetheart of a kitten. Even Sarge is beginning to see it that way. 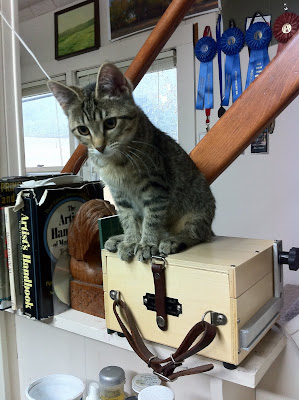 I'M VERY HAPPY TO ANNOUNCE THAT I HAVE JOINED A NEW GALLERY IN TEXAS... R.S.Hanna Gallery, Fredericksburg, TX

I was forunate to have been awarded the Bronze Medal Award at the Oil Painters Of America's (OPA) 19th Annual National Juried Exhibition in Idaho for the painting "Right Or Left?"... 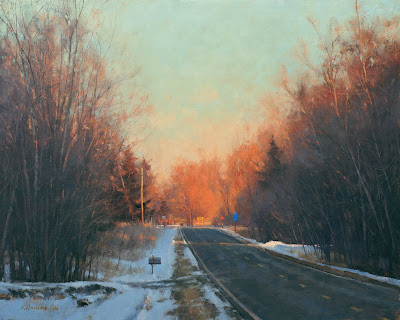 All of these paintings are available, unless marked 'NFS' or at specific galleries and are linked to the galleries that they're hanging in.

Here we go... The first four are just random field studies that I've painted this summer. 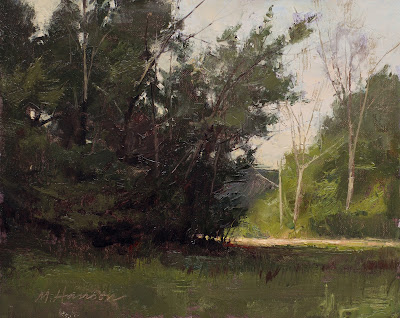 'CORNER LIGHT' 8x10 Oil 2011©Marc R. Hanson
Available at R.S.Hanna Gallery, Fredericksburg, TX
I discovered that I had a tube of Gamblin's 'Chromatic Black' in my paint bin. So I took it out to see if it would be of interest to me when mixing some of the deep summer greens. It works very well for that, it's in my paint box as a 'occasionally used' color now. I used it extensively as my 'blue' when mixing the greens in this painting. There's a lot of scraping and palette knife work here too, a tool that I find myself using more and more now. 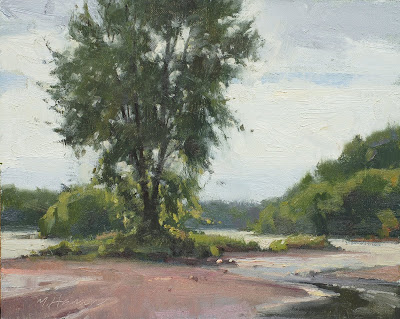 'TREE ISLAND' 8X10 Oil 2011© Marc R. Hanson
This little study was just painted this past week along the river below me in the Interstate Park, Minnesota side. I was looking at a very bright backlit scene that silhouetted the tree shape nicely. That was the starting point conceptually for this one. The silvery light and strong darks attracted me too. 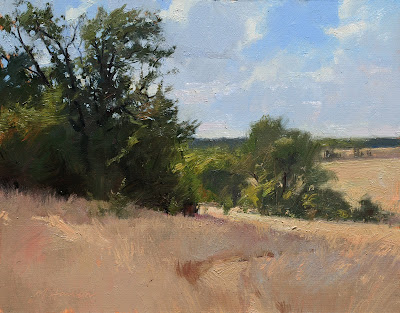 'TEXAS!' 11X14 Oil 2011© Marc R. Hanson NFS
This is the first and only painting that I did in Texas during a trip there in July. Now that I am joining the R.S.Hanna Gallery in Fredericksburg, Tx I hope to be there painting a lot more. There is something about that landscape that is very, very attractive to me. It reminds me a lot of the northern California Sierra Foothills near Loomis where I went to high school and where my mother and brother and his family still live. It's the dry grasses and large oaks spread across rolling hills that do it for me I guess. It was hotter than blazes there, 109º F!!! Of course they've experienced terrible fires there this month, totally devastating. But it's finally beginning to rain from what my friends there are saying... Hallelujah!!! 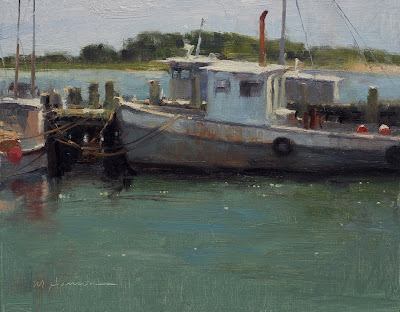 'THAT'S MY BOAT!' 8x10 Oil 2011© Marc R. Hanson
Available at Addison Art Gallery in Orleans, MA.
In June I went out to Cape Cod to paint with friends Shannon Runquist, Paul Schulenburg, Elizabeth Pollie, Frank Gardner, Jerome Green, Sara Jane Doberstein and Peter Kalill. There was an exhibit held at Addison Art Gallery sponsored by the Cape Cod Museum of Art celebrating the 50th Anniversary of the establishment of the Cape Cod National Seashore by President John F. Kennedy. We painted all over the National Seashore area and in the harbors. This was a small boat at the harbor in Wellfleet, Ma.


THE NEXT GROUP OF PAINTINGS ARE ALL DEMOS OR PAINTED DURING MY SUMMER MENTORSHIPS AND WORKSHOPS... 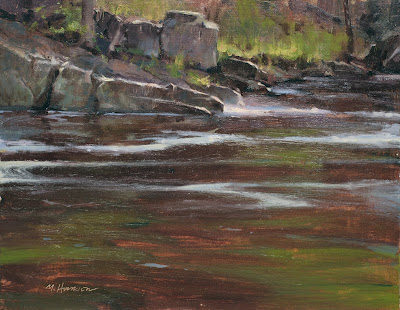 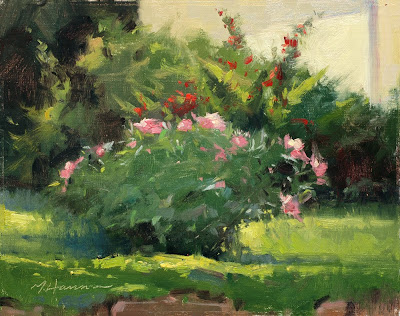 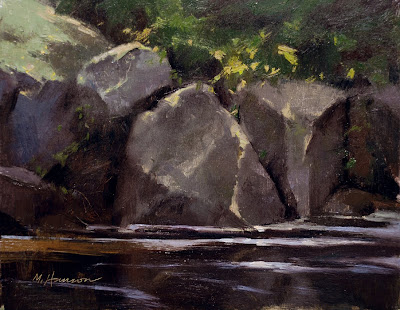 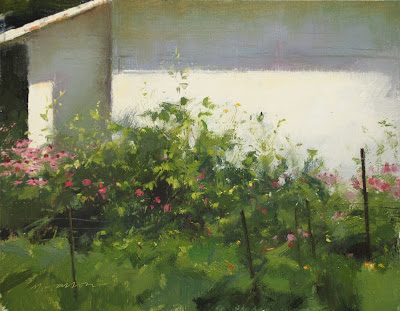 
THE NEXT GROUP OF PAINTINGS ARE PIECES THAT I PAINTED IN JULY AT THE DOOR COUNTY PLEIN AIR FESTIVAL IN WISCONSIN... 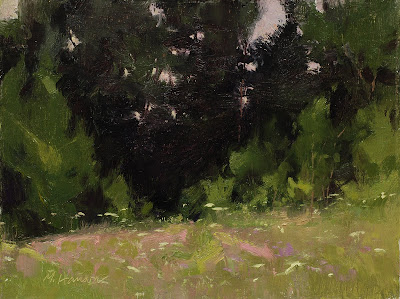 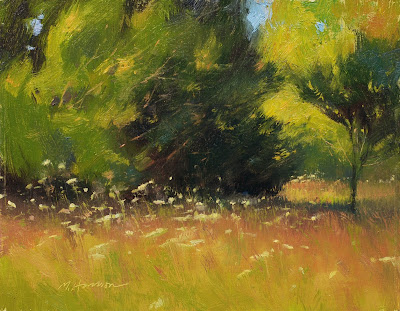 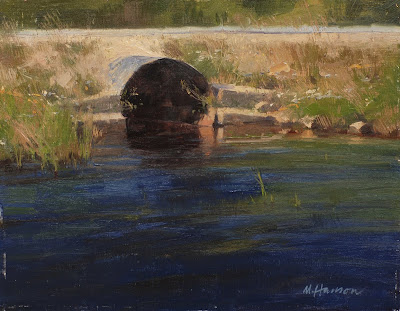 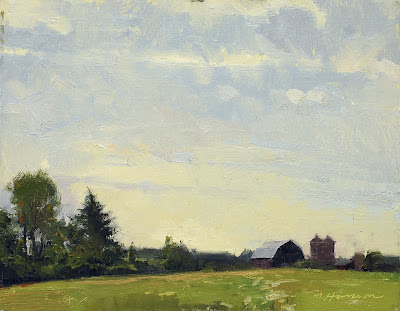 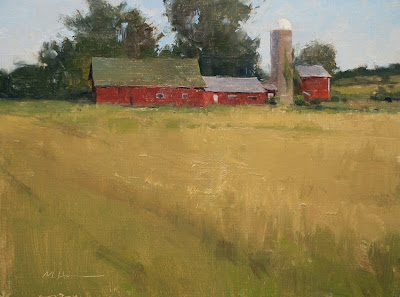 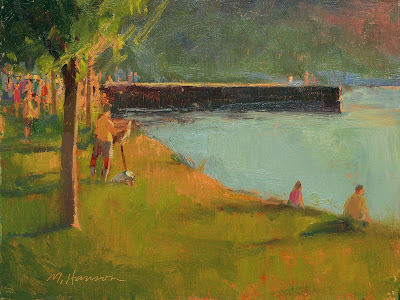 
THE FINAL GROUP OF PAINTINGS ARE OF A SELECTION OF FIELD STUDIES PAINTED OF A SUBJECT THAT HAS BECOME NEAR AND DEAR TO ME THIS YEAR. THE LOCATION IS A 30,000 ACRE WILDLIFE REFUGE MADE UP OF SEDGE MARSH, UPLAND AND PRAIRIE HABITAT IN NW WISCONSIN NEAR GRANTSBURG... AND IS CALLED 'CREX MEADOW'. THIS EXPANSE OF LAND IS A HAVEN FOR CRITTERS AS VARIED AS WOLVES AND SANDHILL CRANES TO BLACK BEARS AND TRUMPETER SWANS. EAGLES, OSPREYS, ASSORTED OTHER WATERFOWL AND FUR BEARING ANIMALS ABOUND. THEY'RE ALL THERE BECAUSE OF THE SPECTACULAR NATURE OF THE ENVIRONMENT THAT HAS BEEN PROTECTED WITHIN THIS ECOSYSTEM OF CREX MEADOWS. I HOPE TO CONTINUE TO DO STUDIES, PHOTOGRAPH AND PAINT LARGER PAINTINGS ON LOCATION WHENEVER I CAN. EXCEPT FOR THE LAST TWO PAINTINGS BELOW, THESE ARE ALL FIELD STUDIES PAINTED ON LOCATION. 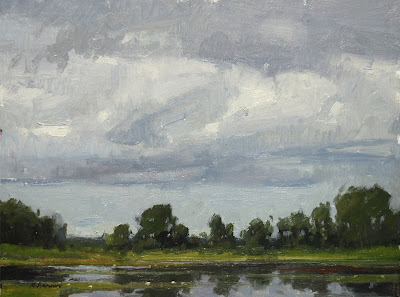 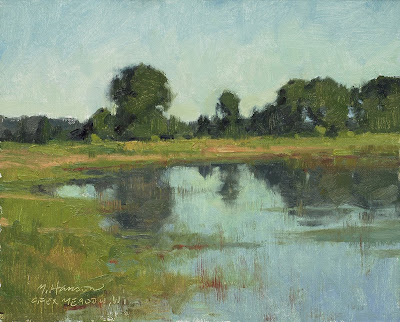 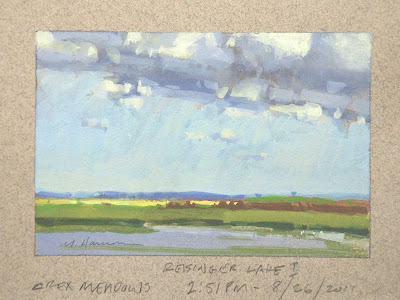 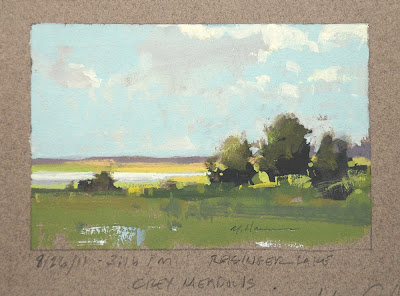 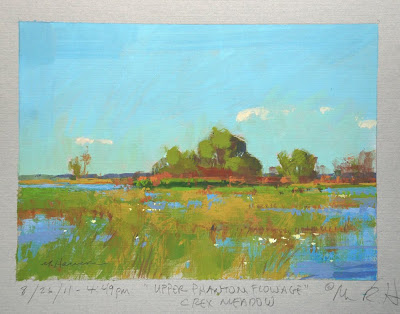 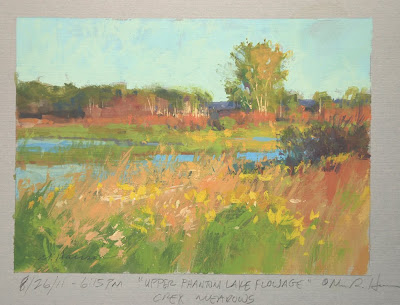 
I had a hard time photographing these two larger studio pieces... But you get the idea. 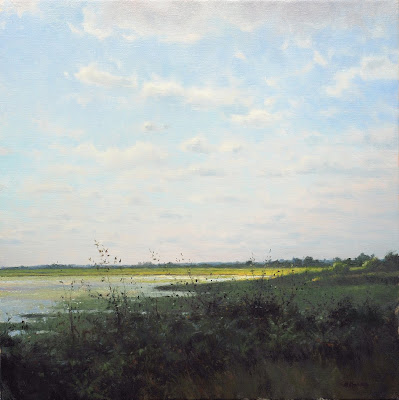 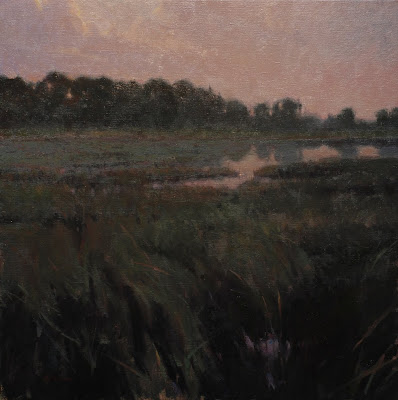