A LEAP INTO FEBRUARY!

A Leap Into February...

I'm 5 days away from beginning this 28 day painting marathon. February 1st, at some early and unknown hour, I'll be venturing outside to paint the first of four paintings for the day.  I'm ready, having secured all of the supplies needed, toned some of the panels, and taken care of most of the household obligations that might otherwise interrupt my progress during the month. My fingers are crossed that no 'anti-art antagonizer' rears it's merciless head, to toss a broken brush at me! 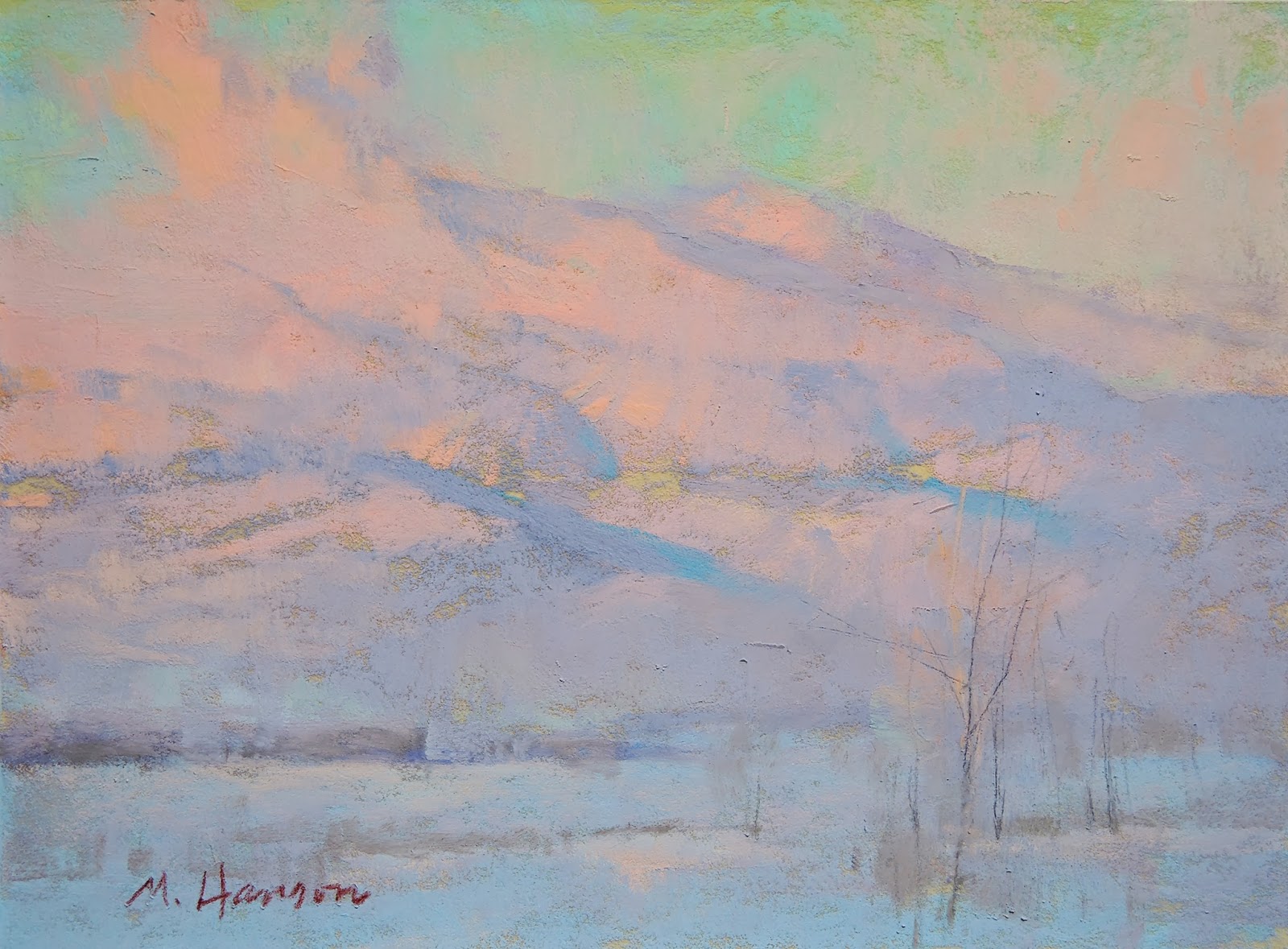 Here's how this will all happen for anyone who wants to follow it along.  Each day I'll paint four 8"x10" oil paintings outside, photograph them, write up a short comment on each, then post to my blog... then sleep... then get up and do it again... for 28 days.

Every evening the paintings will be photographed and posted here on my blog, and on my Daily Paint Works gallery page.

If you are interested in purchasing a painting, there will be a... 'To purchase click here'... link underneath each painting, that will redirect you to the painting on Daily Paint Works.  The paintings may be purchased there using the PayPal service.  They will be available for sale, unframed, as they are posted.  I will keep the paintings until they are dry, and until I have had the show mentioned below.  Once the show is over I will ship any sold paintings, approximately the second or third week of March.  They'll be shipped and insured via USPS Priority Mail.

The big news for me is that the Longmont Council For The Arts and the Muse Gallery, have generously agreed to let me put all 112 paintings on display for two days.  I am very grateful to the LCA for the opportunity to show my interpretations of the month in paint in its entirety.  I've completed three of these painting marathons and have not been able to show them all together before.

For those artists interested, here's the break down of the materials and supplies I'll be painting with.

PAINTING SUPPORT-
8"x10" Centurion OP DLX  (oil primed) linen panels, that I purchased and then toned either a warm neutral or a cooler neutral. I left about a third of the panels white, giving me a choice, depending on what I feel each painting needs at the time.

BRUSHES-
Robert Simmons hog bristle flats, brights and a few rounds in sizes ranging from no.4 to no.12.  I also have some cheap, off the shelf hardware store brushes (1/2"-2") that I find useful.  Lastly, my indispensable arsenal of small, medium and large palette knives.

MISCELLANEOUS-
To further expedite drying, and because I like using it, I will be using Winsor & Newton's 'Drying Linseed Oil' as a medium.
My solvent of choice is Mona Lisa (completely) Odorless Mineral Spirits ( a Speedball Product).  And I use cotton t-shirts and rags, instead do paper towels, to wipe down areas on paintings and to wipe my brushes with.

I want to thank you ahead of time for checking in, and any conversation about the marathon.  With the time that I'll be putting in painting and the rest, please excuse me if I am not able to reply to your comments immediately.  These will be long days, but long days that I am eagerly anticipating. 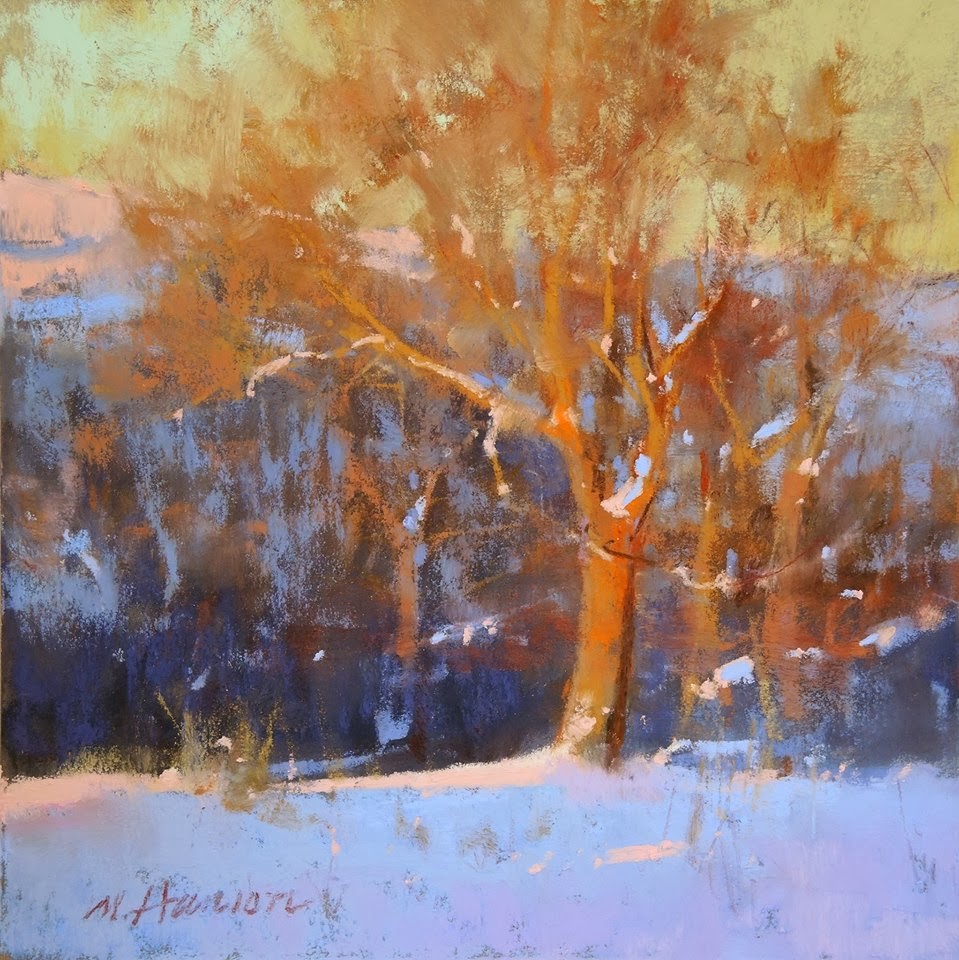 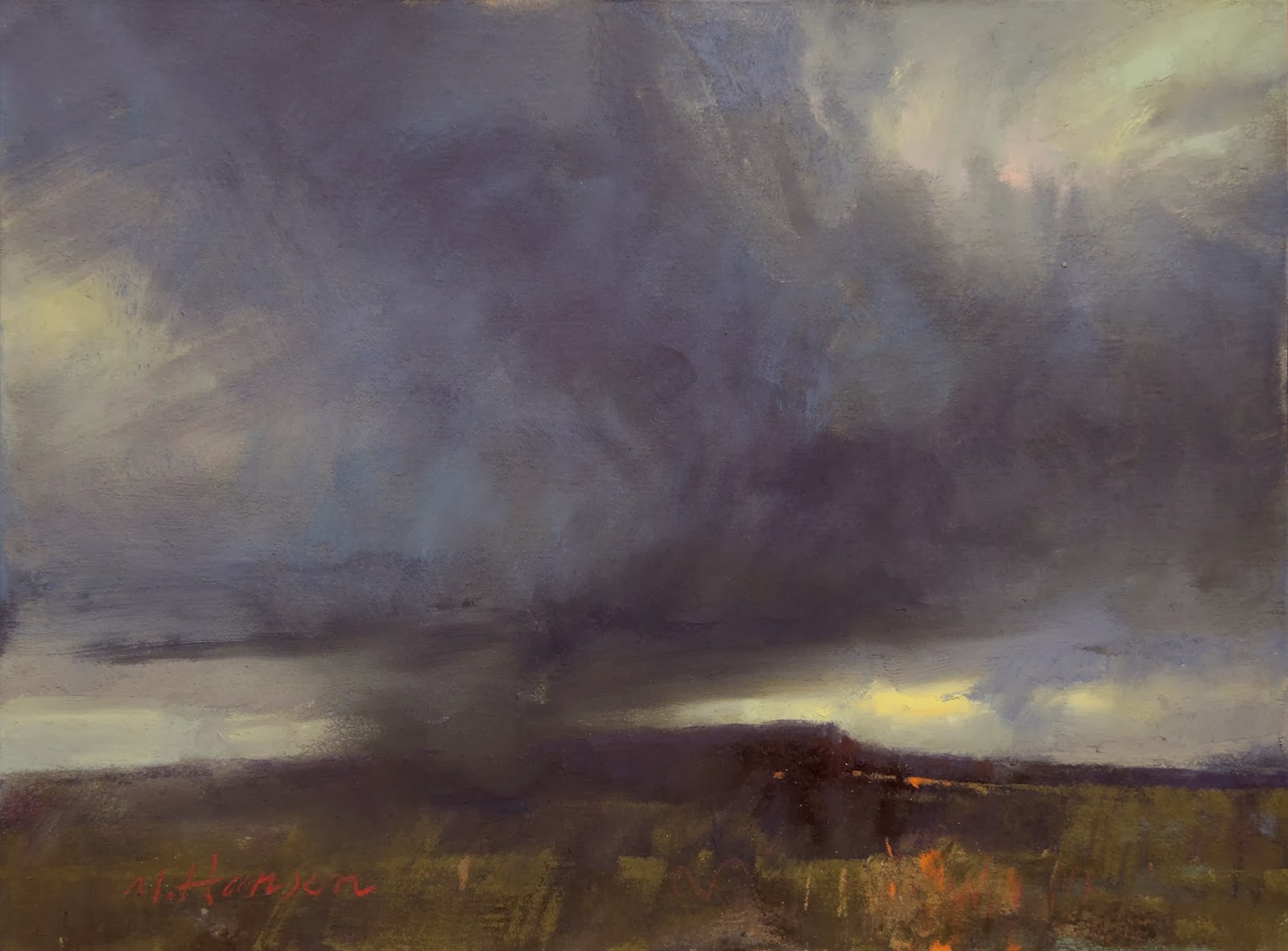 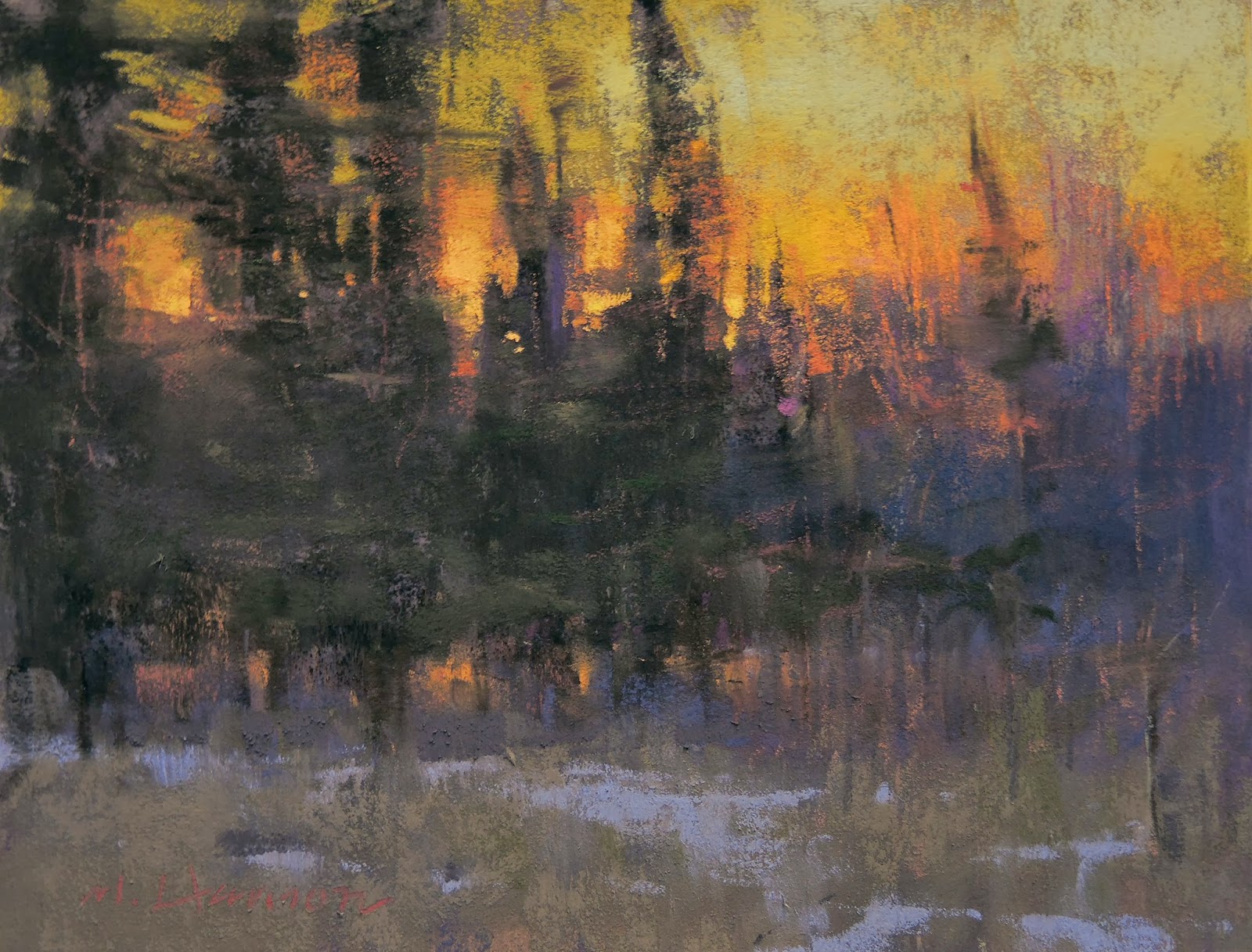 Last week my friend and fellow artist, Barbara Jaenicke, was in town from Atlanta, GA.  In between some family time up in the mountains, and a workshop she was teaching at the Terry Ludwig studio in Littleton, CO, she had a few days to do some painting.  On Monday Barbara, Stacey Peterson of Evergreen, Dave Santillanes of Ft Collins, and yours truly, spent a couple of hours in the afternoon near Longmont, painting.  The painting, "Snow Slope" is my effort for that day.

The next morning our group expanded to include artist friends, Ani Espriella and Lamya Deeb, both of Gunbarrel, Scott Ruthven of Ft Collins, and Dave Santillanes, and we all met up in Rocky Mountain National Park.  As is typical in the winter in the park, the winds were up, way up with gusts approaching 50mph!  We stuck it out, sort of, with some of us inside vehicles, others braced on the leeward side of vehicles as windbreaks.  One painting each is all that we could manage in the conditions.  The painting, "Wind In The Aspens" is the result from the morning. 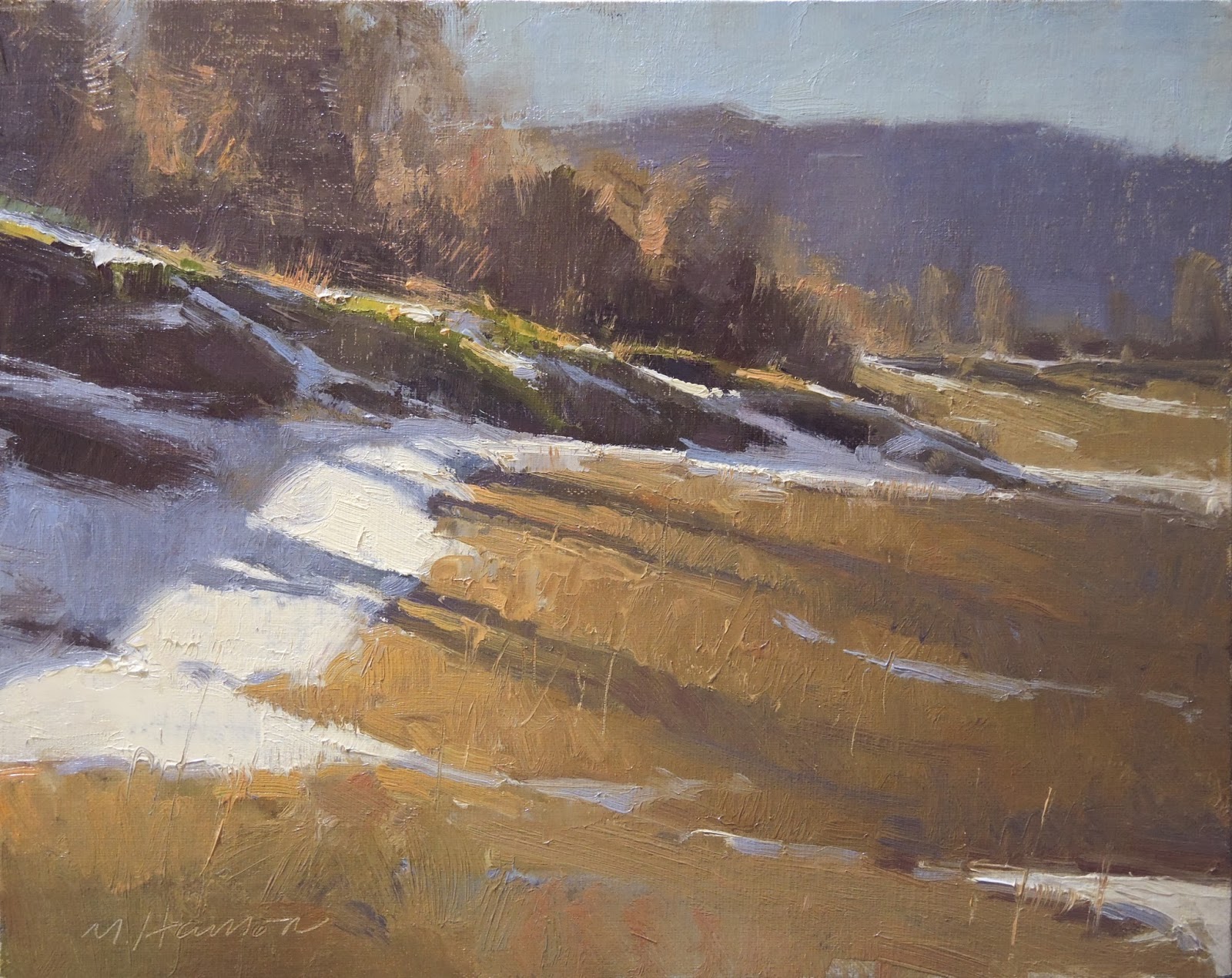 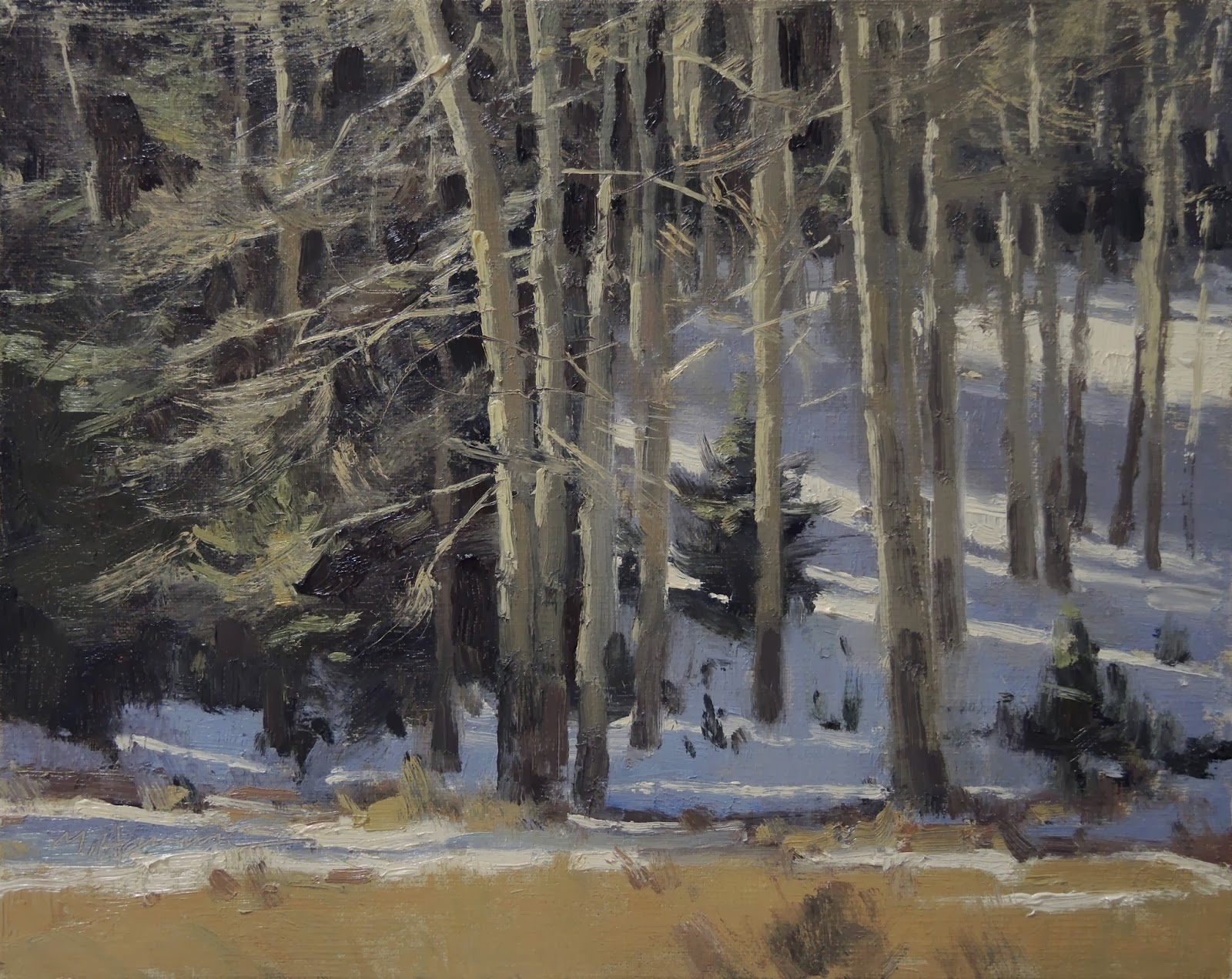 Coming soon... A Leap Into February... a painting marathon!


All of the paintings, 112 in total, will be published here on the blog.  If you'd like to see the daily activities and art, please follow my blog by signing up with the email link to the right of this post.
Details to follow in mid January...
Posted by Marc R. Hanson at 1:08 PM 22 comments: