This is a brief post just to keep something going here. I finished up another workshop with a wonderful group of students on the 14th of August. I'm about to head to New York for another five day workshop tomorrow and will take the time (when I have it) to talk more about both of these events. For now, here are some of the demos that I did for the class last week. We had a nocturne night and I made the mistake of painting under a very orange light. The result is much more red than I thought it was going to be, lesson learned. 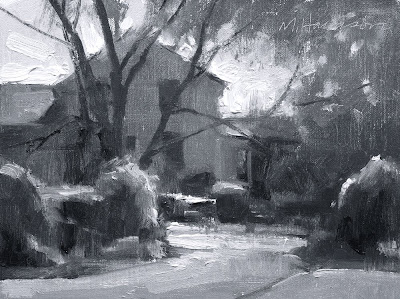 'Don's House' - 6x8 oil.
I use value studies as part of the curriculum in my workshops as a means to show and let be seen by the students, just how important it is to create a good value pattern and scheme in their paintings so that they're better able to understand and use color more effectively. 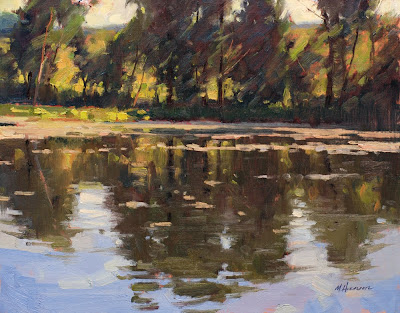 'Across the Pond' - 11x14 oil © Marc R. Hanson '09
I did this demo to talk about reflections and how the color and values in the reflections change in both areas. 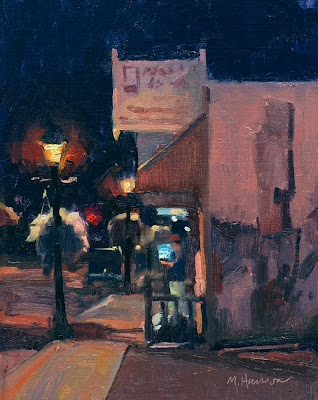 'Taylors Falls Nocturne' - oil 10x8 © Marc R. Hanson '09
Well... the lighting situation messed with me. I did capture one of my students, Steve, painting with an LED booklight. Man was that thing blue! 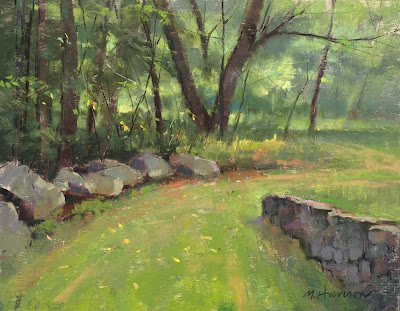 'Mary's Wall' - 11x14 pastel © Marc R. Hanson '09
I usually have at least a couple of pastelists in the group and try to give them some of the limited demo time in that medium. There's a lot to cover in five days and it really doesn't matter what medium you're using, the principles are the same. I'm not teaching 'Oil Painting' or 'Pastel Painting' workshops in this case, those are for another time. 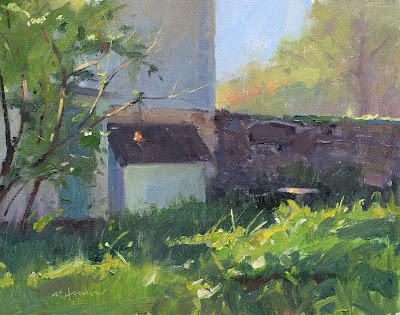 'Clay Pot Bell' - 11x14 oil © Marc R. Hanson '09
This was the last demo, literally, it ended at 3:00 pm on Friday. We had been beat to death with heat and wind the last couple of days so it was as hard for the students to endure this as it was for me to do it. I painted this pretty fast, choosing the place to paint entirely because we were all in the shade. I painted this about as fast as I've painted an 11x4 before. There would be more to do normally, but that's all I had left.
Posted by Marc R. Hanson at 1:06 PM 19 comments:

Using the Beauport and paintbox. I love this set up. As soon as I figure out why my iMac won't accept my camera, I'll post the finished painting I did in this photo, a 14x18 oil of the river canoe launch. 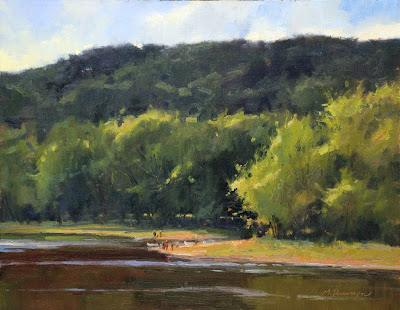 'Canoe Launch' oil on canvas bd, 14x18, © Marc R. Hanson '09
Well this is the first rung on my ladder to larger paintings outside.
The camera and computer are cooperating... sort of. Erratically, but at least it's not a total blow out anymore.
Posted by Marc R. Hanson at 9:58 PM 27 comments: