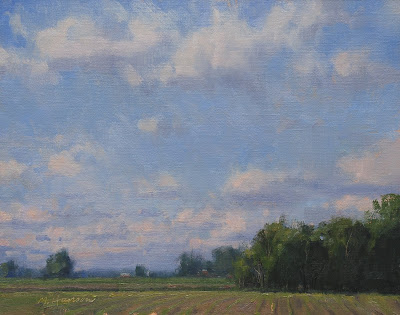 Wouldn't that have been nice?!?! First one of the day was a "wiper". It wasn't a total loss, but I just wasn't 'in the groove' so I decided that rather than waste the board I'd wipe it and move forward. And wouldn't you know it. Five minutes after I did that a local magazine photographer showed up to shoot images for a new publication that is featuring the area. Just my luck.

Fortunately, my painting partner Kami had hers going well, and still intact, so they shot a lot of her working.

So later in the day I took a short drive out my 'painting' road and found this scene. Just another cloud study, or a reflection of just how nice it felt to just be out there looking at the new crops just coming up on a gorgeous day.
Posted by Marc R. Hanson at 10:04 AM 10 comments:

A couple of new pieces.

The first painting is from a morning painting trip with my friend Kami on Saturday the 7th of June. It's a rather large plein air for me, 14x20, on a stretched linen. Just can't beat being there as THE WAY to catch the subtleties of nature. I caught a few of them, and let a few more slip away. But I always feel better having been out there painting from life. There's no doubt in my mind that I learned at least a couple of new things, or made some discoveries, that I wasn't aware of before. And it's likely that the number of things learned is way past just a couple... more likely too many for me to comprehend right now.

The second one wasn't going to be, I wasn't planning to paint. I was up at the local home improvement warehouse store, Menard's for you midwesterners, looking for a table top to apply some tile to. Couldn't find that. But leaving the yard, I drove around the back of the store and noticed a near perfect place to paint. There's a farm (with silo and barn), horses, cows, a little pond, a seldom traveled wide road with a field of cut grass to stand in... what else could you want? But what stopped me in my tracks was the sky yesterday afternoon. Just stunning. Of course by the time I set up and began to paint it's drama had played itself out for the most part and I was left with a nice sky, but not the one that I stopped to paint. This is the result, a little sky study.
Posted by Marc R. Hanson at 3:28 PM 5 comments: