Perfect weekend weather for being out.

We were blessed this past weekend with weather that was made for painting in. It was dry with good atmospheric moisture, despite a pretty low dew point, and the winds were calm to dead calm. Having been in the studio working on some paintings for the November NOLA show, I took advantage of the good weather and snuck out and did these four 11x14's on my 'easel break' each day starting on Friday night. 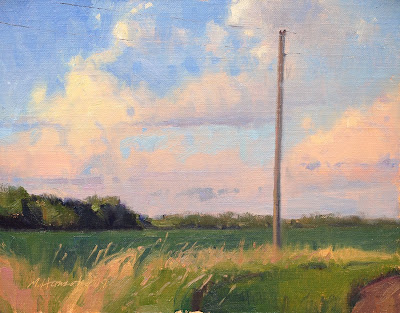 'Friday Evening' - oil on linen - 11x14 - © Marc R. Hanson '08
A sky full of clouds got me out to try to capture the warmth of the evening. I pulled over at the first wide spot and went to work trying to wring out a supporting cast of characters for the cloud dance.

The other thing I am doing (for all of the artist materials junkies out there) is trying out some linen that I haven't used for many years. It's primed with acrylic primer, is Claessens 166 and is my new linen lover! :) For some time I've been searching around to find the best surface for me to paint on considering cost, ease of application of the paint, and it's appearance as a finished product. This linen is looking like a pretty good candidate at this point. My favorite is hand lead primed linen but that is just becoming so expensive that the Scotch in me is holding onto my wallet with a vice grip.

I used two different linens here, the Claessens and Signature Canvas's own acrylic primed linen. Both are great, the Signature linen having a little more pronounced weave than the Claessens. There is no difference to me in the way the paint feels as it is applied and I will be making use of them both as needed. The Signature linen would be perfect for larger paintings, the Claessens is good for smaller pieces. If you haven't checked them out, Signature Canvas offers some great deals on linen by the yard and stretched linen and cotton canvases. I only discovered them in the last couple of months and have used them exclusively now for my linen needs.

These first two pieces are on the Signature linen, and the second two on the Claessens. Enlarge them to see the difference in weave. It's really nice to have these kind of weapons in the arsenal. :) 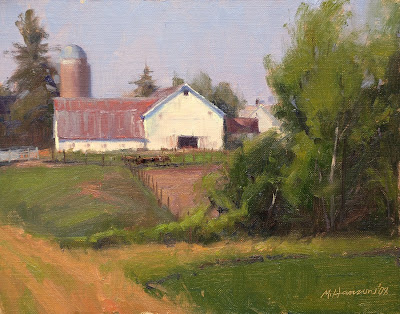 'White Barn' - oil on linen - 11x14 - © Marc R. Hanson '08
I am a roller skier and this barn is on the 18 mile route that I ski, I pass it every time out. Saturday morning I had a wonderful ski session and decided that when I got home and showered, I would come back and paint it. The skies were blue but dark with moisture, causing the barn to stand out with a lot of contrast in value and temperature. The kind of thing that I like to paint. 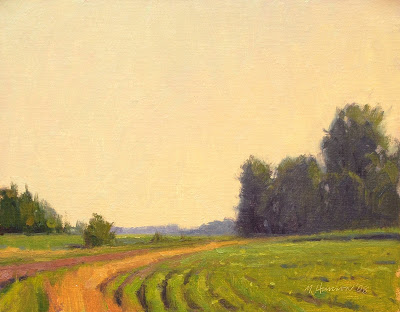 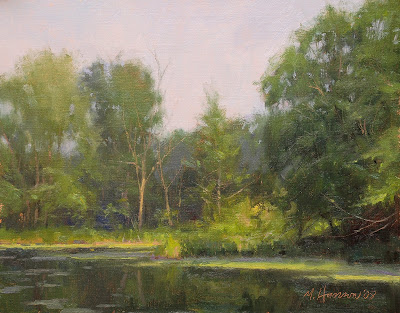 'Balsam Branch Mill Pond' - oil on linen - 11x14 - '08
On Sunday morning I drove east of here about 20 minutes into Wisconsin. The area I chose to paint in is called D.D. Kennedy county park. It used to be an old grist mill and is now a beautifully preserved chunk of native prairie and woodland along the Balsam Branch river, near Balsam Lake, WI. Just a calm, quiet morning to be there.
Posted by Marc R. Hanson at 12:02 PM

the two evening paintings are so so so beautiful...the quality of light...beautiful

the foliage colors and depths, and the glassy water in the balsam pond (forgot to look closely at the title) - so peaceful and pure.

(really like the interesting composition in the barn painting, too)

all are so pleasing close up, too. so nicely painted, all of them.

i way over-wrote on the last post, so i will stop there - but i am so happy to have all these beautiful paintings to look at. thank you so much, as always.

I love all 4 of these Marc, but especially the first one: I love how you included the single telephone pole and just a corner of the road - things that many painters would have left out. Nice!

(also - very interesting about the linens, even though I'm not a painter, i enjoyed reading all of that, and wish i could ask all the questions i have.)

...so much lovingcare in the touch of the brush to the canvas.
- very lovely to view, both close and far!!!

Sometimes there's only one word to express one's response to what one's eyes behold--BEAUTIFUL!!! All!!!

Ditto to what Dianne said!

I was wonder though why not use oil based primer that does not have any lead and prime your own?

Is it a time and space issue?

Beautiful paintings Marc! My favorite is the white barn, lots of contrast. Thanks for the link for Signature Canvas. I hope you don't mind that I added you blog to my favorite blog list.

Hi Joe. Thanks. I didn't know about that telephone pole but felt it needed a vertical for the design so thought..what the h**l!? And it fit. The only reason I felt it worked was that the lines add bit of a counter force to the slant of the pole itself. I liked the tension, no pun intended.

Thank you Jeff... I do that also, yes. I've always done a large part of my painting support making myself whether it was sizing and priming raw linen or board with either lead or oil based primers...or even with mixtures including acrylic primer. All in a search to make surfaces that 'speak' to me individually. I agree completely with that idea.
One of my issues with primers, other than basic lead primer, is that they vary so much. W&N, Gamblin, Frederix, Utrecht... they're all different. I'v e found satisfaction in Gamblin and Utrecht's oil primers but am not so satisfied that I am not still looking. I've used a number of linens preprimed with alkyd and oil primers too. That's a real crap shoot as to how they react from one batch to the next.
So now find this linen with acrylic priming that I had sort of 'shunned' for a long time; feeling that the paint didn't act the same and that it didn't have the same look that oil has on the traditional lead primed surface. Which I think has a richness to it that is hard to compete with. To my surprise this Claessens and the Signature acrylic priming is giving me that look that I want to keep to my paintings...and it's not as toxic or expensive! Those two aspects are keeping me very interested (and I'm using a lot of this stuff to see how I hold up:)... but skeptical too.
The acid test for me will be when the temps drop and get down near freezing. If the paint still works well on it then I will probably be sure to stock up on it enough so that when they do change the formulation (seems that almost always happens), I'll be set and not be scrambling again to find my surface.
I used to love the Frederix Rix and Carleton linens. But that was when they were lead primed. Now they're all 'oil' primed (ie, titanium/zinc and linseed oil) and are too slippery for my taste.

'Taste', the secret word in this topic. My personality and taste in materials, as a painter, has everything to do with my discussing this at all. I wouldn't even begin to be so bold as to suggest that anything I use would be good for another painter. I do suggest experimentation in materials, of course. But the decision is 'theirs' as to which one is suitable for them to paint on.
Thanks for the question.

Hi Jennifer! Thank you for adding me to your links. I'm grateful.
I appreciate that and your comments. Signature is a good resource, hope it works out for you.

Love it when you use rich colors, but you do some lovely subdued ones as well. Are you strictly plein air or mix with photos? Beautiful work!