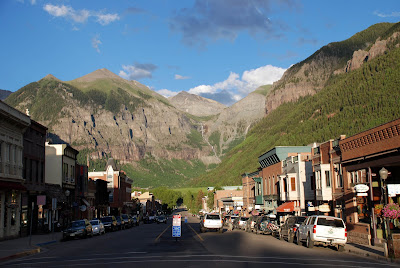 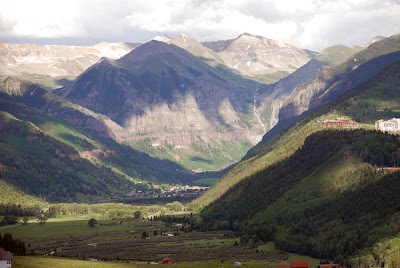 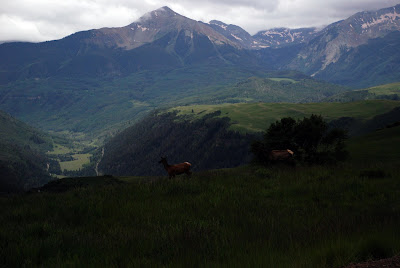 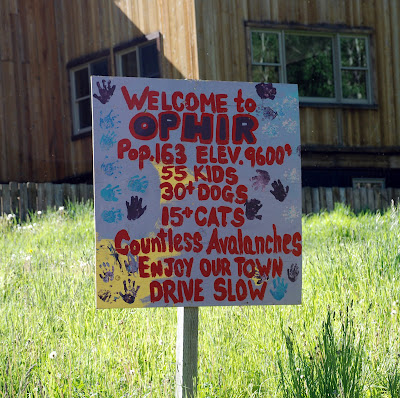 (Another box canyon town up the mountain from Telluride)


'First View-Telluride, CO' oil 6x8 © Marc R. Hanson '09
That's where I've been for the last week. What a spectacular place that is! If you ever have the chance, GO...

We painted for about 3-1/2 days or so, then set up our displays and greeted the crowds on Friday and Saturday the 4th of July. I had a great time meeting so many other artists, local residents and visitors to what might be the most beautiful mountain setting that I've ever been to. The Telluride Plein Air Festival staff were a pleasure to deal with I must say. One of the really great things that most of these events do for the artists is arrange 'host families' to house us for the week, saving a lot of money but also allowing us the chance to meet and become friends with people who live in the area. My host family was more than I would have expected, kind, understanding of the strange schedules that artists keep when deep into painting and socializing, and completely available if needed. A funny side note... I was trying to find their house using GPS and the address. The 'lady' on the GPS took me to a road with a very large gate, security and all. I tried to get in, tried to call my host but couldn't reach them. I found out later that they had been called to a location for their work around the mountain and were out of cell phone range. Anyway we did eventually connect later that evening and I told my host Sheilagh that I had been at the gate but didn't know how to get in. She told me that they didn't have a gate and asked me what the gate looked like and where I was. I told her, she told me that the gate that I was trying my all to get into (called the security guy, the assistant?, etc..) was in fact Tom Cruise's gate! I couldn't see his house, he has a nice place. I don't know why the GPS thought that I should go up that way? They're very accurate. Could it be that the GPS Lady (the female who's voice is constantly giving me directions) had an ulterior motive???

The week finished with a great 4th of July parade, fireworks and a rain storm. I loved being in Telluride. Back when I thought skiing was ALL there was in the world, I would have been in heaven to have landed there. I think that I will go back when the white stuff is covering the green and see what that time of year is like. NO lift lines from what I've been told.

Here are a few from the week that I've edited for posting. I painted about 15 or so pieces and will post them as they get edited too. 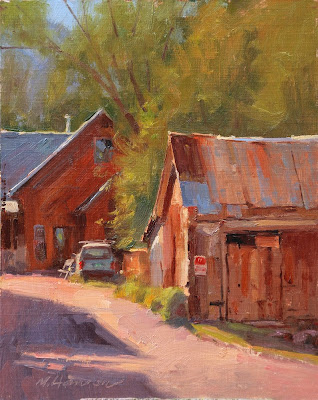 'Vermont Volvo' oil 10x8 © Marc R. Hanson 2009
This is an alley painting, very popular in Telluride because they have a ton of old alleys to be painted. I sold this one at the Artist Choice Gala event in a silent auction. 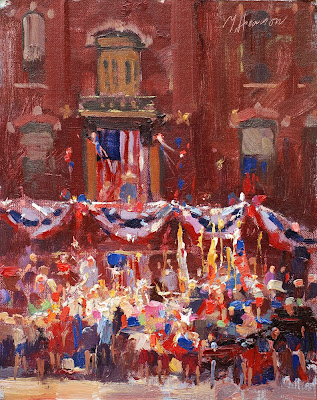 'Flash Boom!' oil 10x8 © Marc R. Hanson 2009
The last day was the 4th of July. Most of us in the exhibit decided to paint that day. Ken DeWaard and I painted the parade, Walter porter painted me painting the parade. It was your a typical small town parade full of characters, children, dogs (lot's of dogs in Telluride), and red, white and blue. The painting was done in about an hour. I started it when there were only a few people in front of me. By the time I finished there were about 4000 people in front of me. This is as impressionistic as I probably paint but it was fun to do. A very nice lady saw it and decided that she should have it for her house. 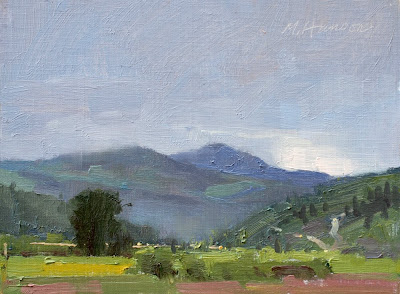 'Down Valley' oil 6x8 © Marc R. Hanson '09
One of the nice things about being in a large mountain range is that you can watch weather happen at some distance away without it affecting you... meaning I could paint rainstorms while staying dry. This is one looking out the valley from Telluride.

Incredible views. I better not visit there... I sure wouldn't want to leave. I am waiting on your next marathon. The last one was so much fun to follow.

Wonderful! My guess is she wasn't the only person who wanted to take this one home. It really catches the atmosphere and excitement of the moment. Love it!

This post is just spectacular. Your paintings are great. I love reading your stories. Thanks for taking us along on your adventures.

Great stuff Marc. I love that alley one and the parade painting especially. Can't wait to see the others.
Looks like a nice place to paint.

Wonderful work! Sounds like an amazing trip in a beautiful spot. The two paintings, "volvo" and the "4th parade" are terrific. I am so inspired!

I love all of your paintings Marc! Telluride truly is a breathtaking place. By the way, my GPS "lady" often does the same things to me- ha!

WOW. Marc, these are fantastic. What an amazing place to visit and paint. Can't wait to see the rest of your work from the week.

Nice to meet you in Telluride Marc!
It was a great week, wasn't it?!

Hi Mark!
Sounds like you had a fantastic time...... and your paintings are gorgeous! I love the 4th of July..... lucky lady that had to have it.

Anxious to meet up with you again.... and catch up.... in a couple of weeks in Door!

I especially like the alley painting, Marc. Nice story about the GPS lady. We have an older Magellan, and call her "Maggie." She's usually right-on, but sometimes she exhibits symptoms of senescence.

wow, great work Marc! I love the parade painting - you can just feel the energy of being there.

Sounds like a great time - the paintings are wonderful. Oh to be in a cooler climate right now! I'm glad your back and posting again ;-)

Hi everyone. Thanks for all of your comments. I'm glad that I'm not the only one who looks at those GPS ladies as comical. I am so thankful for her accuracy that I rarely get upset with her voice or the occasional inaccuracy. I do have one gripe however and it has to do with trying to find a certain very large sports supply store and her insisting that it's some poor guys yard on a cul-de-sac about 2 miles from where the store really is. Other than that, she's saved me many, many miles of backtracking and hours of grief.

As I already alluded to, Telluride is worth a trip to. I hear that the mountain towns all around there are nice, Durango, Crested Butte, and so on. But everyone says that Telluride is a special place, different because of it's location in the head of the box canyon. The entire area was gorgeous truthfully.

I'm glad to have supplied you with some inspiration, some armchair traveling and to have created the desire to go there.

Deborah it was doubly nice to meet you and Steve. We had that 'boat' thing in common too.

I'll be shooting the other paintings and getting them up here too soon.

Flash Boom has the same aural quality and rich motion that Frank's Perigrinos has. Wouldn't they look nice hanging beside each other?!

Anyway, such a delightful painting!