Hi again....I don't know why, but it seems hard to both paint and get the computer stuff done?! Most of my work has been done in the studio lately or on the road. I'm not going to post my New Orleans studies, yet, because they're the raw material for the larger studio pieces that will be painted in the next few months. As a preview though, here's a painting done for the show which will open in November of 2008 at Coleman Fine Art in Charleston, SC. Okay, I'll post the study for this one as long as I've already painted the studio version. We set up on this dike road across from Algiers, LA to paint, and had about 10 minutes before the rains started in again. Did I say it rained down there in NOLA?!!! Rained barge loads of water. But, I did get a memory and a color note to work with along with the photos I took. In the studio version I decided to give the image more sky, and to 'brighten up' the light so that it wasn't so gloomy like the study. I hope you enjoy the result. 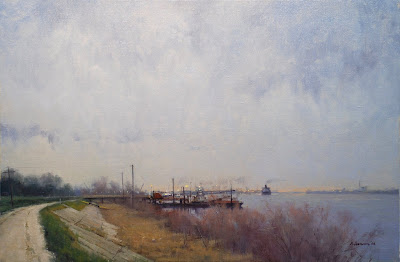 Here are a few recent field studies of the rather chilly spring. It is finally turning green a little. Now if it would only quit snowing!!! 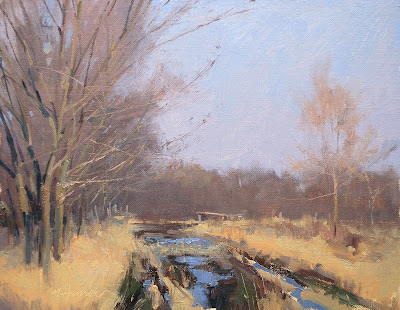 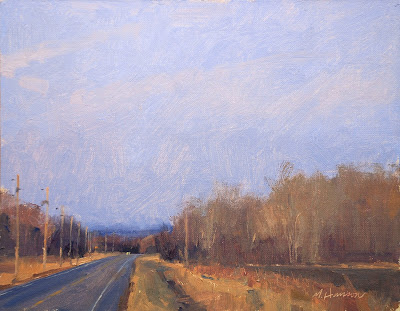 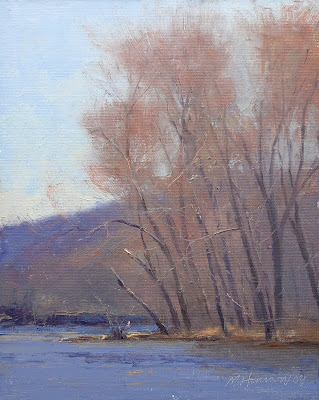 Late March found me in Charleston, SC at Coleman Fine Art's 'Wet Paint' event, a week of painting followed up with a very successful show on Friday night. Kate Starling, Daud Akhriev, Mary Whyte and I spent the week wandering the Charleston vicinity and doing our best to do it right. The week started out by making me wonder why I had gone all the way to Charleston for 30F degree weather and wind....we have that here...today as a matter of fact! But it did warm up as the week wore on and we had an absolutely great time painting. I took photos as a record of the work, but frankly they didn't really turn out that well. Paintings were taken into the gallery each afternoon as they were completed, as they were with no touching up. Then on Friday morning we framed and the gallery hung them in the afternoon. Smith, Mary and the gallery staff put on a great show opening with a string quartet in the garden, Hors d'oeuvre, and a lot of wonderful art loving people in attendance. WE had a good night.

This weekend I'm off to Missoula, MT for the OPA National Exhibit that my painting 'Prairie Fires' is a part of. Should be an exciting weekend of art demos, receptions and some painting if the weather permits. Minnesota is well represented in the show. 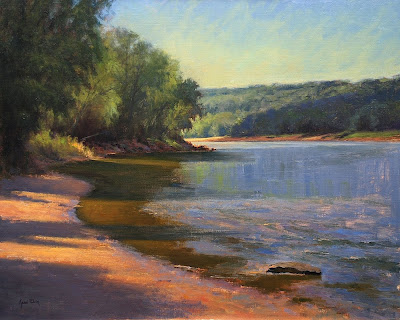 My best friend and painting buddy Kami Polzin's painting 'Light Around The Bend' ( seen above, a 24"x30" oil) is in the show too, as are paintings by my good friends Mike Rada (Burnsville), Ben Bauer (Stillwater), and Steve Atkinson (Mpls)!!!
Posted by Marc R. Hanson at 1:41 PM

Marc,
I really like seeing the studies posted along with the studio paintings. Seeing how you executed that mood shift is great to see/study. Also, on the 'Bright Light of Spring' painting, the little touches of light off of those branches is so nice. They really show in the high res. Have fun in MT!

Hi Marc, glad to see another post out of you.
I like seeing the field sketch and studio piece. Love em both. The loose shorthand of the sketch and how you changed up the left foreground and added the boat. Good stuff.
I like "Bright Light of Spring" a lot too.

Hi Tim...MT was fun! Someone from that area told me yesterday that if you want cowboys go to Bozeman, something else in Helena, and if you want Hippies go to Missoula! It has a great cultural scene in place with lot's of young minds stirring things up. That is a refreshing thing to see. Not to mention the art at the OPA show and the scenery. We painted a couple of pieces that I will try to photo and post.

Frank...Thanks. I was surprised by what a ten minute sketch left with me as an impression of the time. Maybe one of the best things about what we do, having life leave us with so much memory of it. I appreciate your comments.