Here are a couple from the OPA trip to Missoula, MT the first weekend of May. There were a lot of activities over the weekend but Kami, Joni Jurek and I managed to get out into the country side to paint a couple of times. It's always hard to go somewhere new and find the spots right away. So there is a lot of driving usually involved, especially when somewhere like Montana where every bend is another inspiring view...but what's around that next corner??? That's the trap.
We painted up the Blackfoot River canyon, northeast of Missoula, and south of Missoula in the Bitteroot River Valley...Stunning!!!
For some reason we spent a long time on each of our little 8x10's. We think it's because it was just so nice to be out there in the West's warmer weather, standing at the foot of such majesty...painting. I continue to be amazed at how special it is that I get to dot this thing I do. And when standing amidst the grandeur of the western mountains, quantity is a 'lower shelf' item, quality of the experience is 'top shelf' for me. 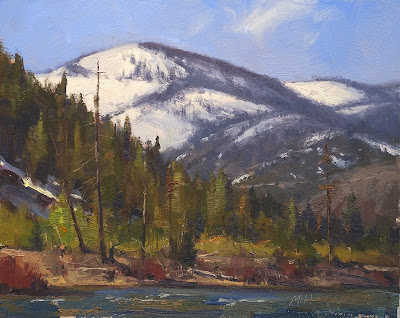 This piece is from our stop along the Blackfoot River. It had all the 'pictorial' elements that attract picture makers like us. Blue sky, distant snow covered peaks, good middle ground darks and a foreground of the rushing Blackfoot River. What's not to like about that?
I painted it on one of my pumice/acrylic primed boards using W/N Griffon Quick Dry White. I only mention that because the combo of the two creates a pretty tacky surface, good for dragging a loaded brush of paint onto. You'll see that texture if you enlarge the image by clicking on it. 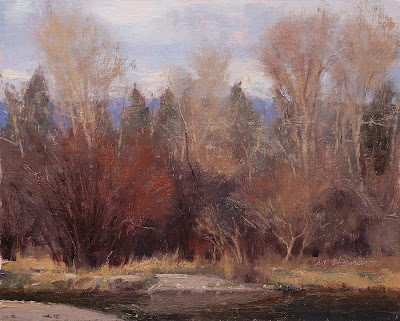 There is a story to this location that relates to the title. Again, Kami, Joni and I were happily enjoying, the Bitterroot River this time, and the glory of being in the Big Sky country with paints and friends. This location was spectacular, I'm attaching another photo to show what we were up against, and we took some time to feel it out...but mostly to just marvel at the beauty all around us. 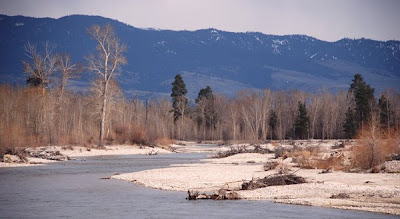 Once we set up to paint, and were happily painting along, Kami and I were jolted by the sudden very angry growling and barking of a dog about 5 yards behind us. This was not a dog just saying "Hey, look at me!". This, ears laid back, snarling (ugly by the way) critter was saying something more like "Get the *^@!(**!#* out of here or I'm going to eat YOU BOTH!!!" We decided it best not to pay any attention to him...right...that is the hardest thing in the world to do, paint with a vicious dog right behind you while ignoring the dog. Well this went on for some time. Eventually we grouped together, along with a big stick in hand, to look like more unappealing 'victims' to this dog. That didn't do a lot to dissuade his intentions for quite some time. This was uncomfortable and the normal things like not making eye contact, ignoring it and even indicating that we were willing to jump into the rushing river if need be...didn't seem to make a difference. To abbreviate a really long story, eventually he wandered off...towards Joni who did avoid him by her ignoring his snarls...with no damage. We did keep a look out for him the rest of the time we were painting though...and that was a real interruption to our concentration.
Could be why we painted on our 8x10 panels for...well...let's just say...'too long'. :)
Hence the title of my sketch from the location..."Bitter Dog Barking".
Posted by Marc R. Hanson at 9:54 AM

Good story. I hate when that happens. You got a good painting out of it.

i like how you get all the detail with a minimum of strokes..and you make a bunch of browns look great.