For a change of pace, and a total "re-education", I've been part of a Thursday 'sculpted portrait' class for the last 8 weeks. Unfortunately spring has brought a lot of travel for me and I have missed several sessions. Our instructor is James Shoop (click the title for his website), a highly trained and schooled sculptor (attended The Art Students League, and other New York schools) who teaches anatomy at the Atelier Lack in Minneapolis and in his studio in St.Croix Falls, WI. We are very fortunate to be able to study under him. He is 'the' model figurine maker for DC Comics, designing all of the models for any figurative products that they produce for the commercial market.

We are working in an oil based clay that doesn't really dry out as long as it's covered minimally. It's heated in a microwave to loosen it up to a workable consistency and applied over an armature that is made of metal pipe and wire.

The studies are life size, measuring from the model with calipers, and built slowly from the skull out.

My study is far from complete, but the basic proportions and structure are in place making it possible for me to continue to work at home with photos...I hope. On my piece I've just begun to build the mass of her hair, that is a major part of the design and to finish this will be very important to do well.

This side of the head is most complete. I took it as far as I could and got approval on placement from Jim so that I could use it as a reference for the other side. The model is a belly dancer with long flowing dreadlocks coming around her neck and over her shoulder, down her back and bangles in her hair. All of that would need to be added. But first and foremost is the basic structure and for me that was a challenge enough. I was not interested in 'finish', I know from teaching painting that having that in your mind when trying to learn a new thing is a trap. First the basics, then the rest. The process of working 3 dimensionally is exciting for a painter.

Where we are used to thinking "lighter, darker...warmer, cooler", to describe form, now becomes a process of angles, curves and movement in space...actual space, not 2 dimensional space. That was a challenge to re-orient my thinking process, to realize that I had to know which direction a planar angle held in space and how fast it made a directional change, where it started and stopped in actuality instead of where I could make it stop with color and value on a flat surface.

You probably all know this, but not having had any sculpture in my past, this was all very new to me...eye opening!

This has been one of the most enjoyable diversions into a different 'Art' arena that I've ever taken up. I hope to continue the challenge. Here's my effort to date. 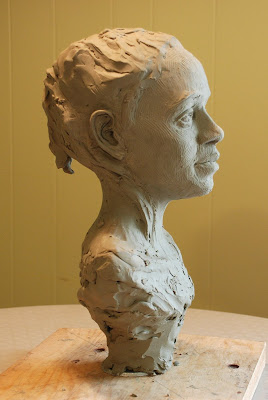 I'll post Jim's piece to show how it's really done...though he says this is a long way from finish too. Pardon the photograph as it was taken hand held in very low light. His work is really spectacular as you can tell from even this incomplete study. As I mentioned, we are very lucky to have him just across the river in St. Croix Falls! 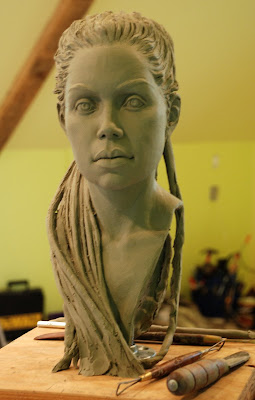 Beautiful sculpture! I've never tried portraits in 3D, looks like it would be a great experience.

peggi...Thank you! This was a first for me and I'm surprisingly enthusiastic about doing more. The instructor, James, is going to be doing a full figure anatomy class this fall where we'll be constructing the muscles to the skin from the skeleton out.
I am not a portrait painter, but have always had a little hidden desire to do that. My experience with it goes back to art school and not much since. But I have to say that this class has taught me so much about proportion and placement that I am anxious now to do some painting of faces too.
Not that I am the knowledgeable one, but I'd tell anyone who paints portraits to find a class with a sculptor to give it a try. Lot's of fun, and a true learning experience.
Thanks for looking in.

Lovely. You did a great job.