So tonight I learned that what I should have done before starting this one was to approach the mosquito spray companies to see if they'd sponsor me. I'm going to be using sooo much of that stuff that their profits are going to go up and they should share them with me... it's only fair!

It didn't get dark as soon as I had expected, dashing my hopes of being inside and eating dinner by 9:30PM! But I was in by 10:20. I couldn't really start painting until almost 8:30. Before that I could still see light in the sky. In the future, I may decide that a nocturne is really "legal" at "Actual" sunset and not "Civil Twilight" a half hour later when it finally gets 'dark' dark.

Photographing these was as hard as it gets. I apologize for the glare. 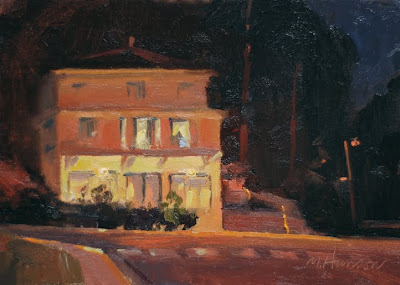 Anyway, I went into downtown Taylors Falls and painted the Old Jail B&B. This was the sight of Taylors Falls first jail. It's always lit up nice and I have wanted to paint it at night for a while now, so I did. The owner came by with his bulldog named 'Jimmy Buffet'??? I have no idea why unless he likes Margaritas, he doesn't look like Jimmy Buffet and I didn't hear him sing anything either??? 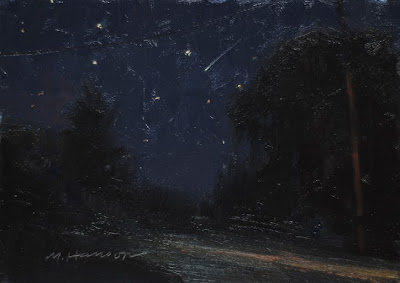 From there I went back up to my house, turned off all of the house lights and was treated to a beautiful starry night with the Big Dipper stage center out the back door. It's a pretty dark scene, as a lot of these might end up being, but I like the subtleties that show up in the light on the utility pole and the grass that is being cast by the street light across the road. Even had shooting stars helping me out. There must be a meteor shower, I saw a lot of them.

I discovered that to paint this kind of scene, a naturally lit scene, I have to turn the light on and off in order for my eyes to stay sensitive to the dark. Some have suggested using a red light, I used to do that as a pilot, but I wonder what that is like to paint under? Might try before this is over. But turning off the light worked out real well. I actually ended up just grabbing the light in my hand and blocking it out every once in awhile. When the light is on, I can't see anything of the subject. But when it's blocked or off, in a few seconds the eyes adjust and all of that beautiful subtle light is available for use.

This is where that crazy exercise that I teach in my classes, The Memory Exercise, comes into play. At last, everyone who I've made do that will actually have a reason to use it!!! Without being able to recall what I saw when the light was off, I could not have painted the second piece tonight.
Posted by Marc R. Hanson at 10:33 PM

Beautiful work Marc! Fantastic idea. I look forward to them each day!

Great start! I just read the rule book and it says you can start to paint a nocturne at whatever hour you want. So there you go.

Thanks Nancy and Frank.

Yeah -- if you can get hold of a welding mask, you can paint day for night!

nice paintings Marc, i thought about the mosquitoes at night with your led lights, they probably like a bit of your blood too.

get some of that Deep.

Marc those are some amazing colourful darks you have there. Please share the mix if you remember :)

Also if you put the light behind you it may give you less light, but it will not close your puples as much and allow you to see more without turning the light off. The light source in your field of vision and close up is harsh.

Marc I think you should keep the auctions for these painting open for at least a week, maybe 2 weeks, 24 hours is just way to short.


PS The pastel you did called "Dingies" is probably in my top 10 favourite paintings.

Marc as a Plein Air Painter I love this idea, I will eagerly await them each day.

These are great Marc!
In support of Frank's rule of legal nocturnes starting any hour you want - I suppose you could hold to the theory that it's dark somewhere.

Marc have you tried those little fan like things you clip to you belt that are supposed to keep the flies at bay? Good luck with your project. Do you ever have any problems with glare when you paint at night? I was out painting the other night and all the glare off my wet paint from the booklights made it a little difficult to see what I was doing.

You could wear an eyepatch over one eye so that that eye retains it's night vision and you don't have to wait. I'm told that's why pirates wore an eyepatch...to be able to see in the dimly lit hold of the ship...no one could sneak up on you!

What a terrific start on your challenge. I love the second one with the stars!!!

I found your blog via James Gurney, and I just wanted to offer my encouragement for your month of Nocturnes! They're really beautiful so far. :)

Marc,
You may consider or even try incense instead of spray, ... I guess it would be much healthier in the long run. I wondered if you where too intoxicated to noticed the bugs or if the spray really worked.

What a great start in your Nocturne Painting Marathon! I look forward to hearing about your adventure each night and seeing your awesome paintings!