I've made an impact! I'm now known as the 'eBay guy', locally anyway. Tonight as I was painting, in the rain, a very nice lady walked across the street from Romayne's Bar and Grill, my subject in the first painting. She initially wanted to know what a guy with lights was doing hanging out on the sidewalk in the dark on a stormy night when all of the summer traffic was gone... NO ONE was in town any longer. When she walked up she said "Are you the guy who's on eBay, painting a couple paintings a day?" Well blow me down with a wisp of air! That took me by surprise to say the least. Evidently she searches for Taylors Falls items on eBay and when she did a search the other day, I came up and she saved my painting to follow along. I gave her a card with my blog address on it so that she could follow the whole kit and kaboodle. I was very proud that in my own town there are people who I don't even know who might be paying attention to what I'm doing in this marathon. I want to thank her here for making the trip across the street tonight to tell me that.

A little side rambling... I can amuse myself with very little, and I'm doing it again. As humans we are so conditioned to act and feel based on similar events in our past. How many of us have eaten something when we were very young, gotten sick on it because we had the flu, mumps, or some reason for it to make us sick other than the food, and to this day we can't stand to eat that food!!!??? For me it's carmel apples (I know, it makes me sick that I can't eat them) and the mumps... haven't eaten one since I was about 8 or 9 years old when because of having the mumps a carmel apple made me very sick.

Conditioning... During my April Painting 'Marathon' 2009, every single day I walked out the door it was nasty, some less than others, but still not all that pleasant and I wasn't all that anxious always to face it. It left an impression.

So here I am in another 'Marathon' and I'm cracking up because every night when I head out I put on long johns, three shirts and a fleece! By the time I get a few blocks away to paint, I'm hot and taking those extra items off. The only reason I can think of that I do this is because I'm 'pre-conditioned' from the 2009 Marathon and I'm doing another Marathon now... So...

To my pleasant surprise each night out, it's actually pretty warm! Once I'm on location I get kind of excited to be painting a Marathon that doesn't require gloves and a ski hat!!! 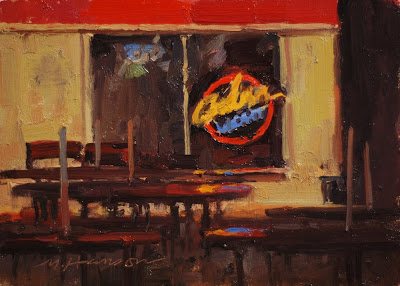 SOLD
9/6-1 'Golden Light'
This is a painting of the courtyard of a local eating and drinking establishment called Romayne's here in Taylors Falls. I found the dark of the foreground tables sans the umbrellas for the night, played against the lit wall and the 'Golden Light' sign a good subject.

I was pretty excited to just camp on the, now quiet, streets of Taylors Falls tonight and paint. My plan was to stay in one spot and get my work done. Well as usual, Mother Nature had different plans. It was raining when I left the house tonight so I placed myself under an awning so that I could paint in the rain. What I didn't do was take my anti- lightening strike pills. As I was working on this one the skies became evil incarnate! With one strike, I saw at least 6 or 7 veins of lightening careening over the top of the hills in front of me, and my ears were about blown out, it was so loud and near by. That did it... I finished up and came home out of harms way. I don't mind rain, even tolerate wind... but lightening is a force that I just don't mess with.

SOLD
9/6-2 'Oscar the Grouch'
I have two pets, Sargent who I painted last night, and my fish Oscar. Oscar started life as a 1-1/2" Walmart resident. I rescued him and he's now about 7" or 8" inches long, the size of a large, really large bluegill. He has that grouchy look that has earned him the nickname 'Oscar the Grouch'. Getting chased inside tonight I thought it would be fun to paint Oscar in his 40 gallon aquarium. He's a beautiful specimen... but he doesn't hold still any longer than his companion Sargent. Animals that aren't on film or a memory card are hard to paint! I'm hoping for good weather so that I can stick to the buildings, trees and other subjects that don't move... ever.
Posted by Marc R. Hanson at 11:07 PM

Hehe there are eyes everywhere!

I hope the weather gets better...or we might see the rest painted from the comfort of your living room. :-)

Oh Marc... You made me laugh out loud today and I thank you!!

Not only do I enjoy your banter but as I was reading about the lightning strikes and scrolled down to see Oscar for some reason it just struck me funny...

I love to laugh. (and I always enjoy your wonderful paintings.)

Congratulations on your local fame.... You're already famous far and wide but now you're the local e-bay guy, huh??

There sure are Eugene! I hope the weather gets better too or I'm going to have to get a bird, snake, turtle, hamster, guinea pig... you get the idea! :-0

Marian I'm glad to help out!!! The most interesting things happen while out painting and I seem to find them humorous in most cases. I'm not sure that I've ever seen someone walk up to me while painting that didn't have a smile on their face, you've probably had the same experience. That is, other than a landowner who thinks that you're doing something that is going to affect them. Even those people calm down and talk once they realize that you're "just an artist".

Last night another lady stopped in her mini van, told me that she had walked by me the night before on the street with her dog and just wanted to see if I knew about the art classes in St Croix Falls, across the river??? It was pouring rain, lightening flashing, she was soaked and she still had a big grin on her face and got this way just to ask me that question. She had the body attitude of someone who was very nervous to be approaching and intruding on the 'artist at work', but still was wearing a big grin.

It makes you feel very good that the people who live around you have that kind of interest and wonder about the arts. We're in an area that is sparsely populated, but full of artists and artisans.

Really enjoying seeing all of these paintings Marc - great stuff. Thanks for sharing the light on a stick tip!

From a childhood flu I can't eat chocolate covered bananas. Of course it didn't affect me much because I haven't seem one since. I still don't know where my sister could have gotten it. Humm.

People seem to approach me smiling then proceed to tell me their life story. 50% ask, 'do you do this full time or as a hobby?' Do you get that? In the past I have (lied) and answered both ways and they always proceed to reevaluate the painting before them. I don't know what the 'right' answer is. (the truth is hobby) You think it effects their judgement?

Thank you George... and you're welcome. We're a fraternity, sharing the thing that help is a good thing.

Thank you... and I hear you Brad. Chocolate covered bananas used to be something that you'd run into but you're right, haven't heard of one of those for a long time.

Yeah, people ask a lot of questions, and the questions are almost always right out of the book.

I'd tell them that "Being an artist isn't a choice, hobby or full time. Every artist is an artist full time. If you're in it for the right reasons, you're thinking about art constantly no matter what else you do, and that is the essence of what an artist is. Making money isn't the point, being an artist and making Art is."... you can quote me on that!!! ;-)

Thanks for the laugh, and for sharing your beautiful paintings.

(Oscar may not have been your first choice for a nocturne, but he is a worthy one.)

Three Cheers to you Marc for your dedication! Love your work and following your Sept marathon! You did a great job on Oscar! Thanks so much for inspiring and sharing--wishing you lots of warm weather in Sept! :D

Oscar's portrait is AWESOME!!!! Way to go Marc, I love it.

Way to go "Ebay" guy. I admire your painting in any weather. Really like the one of Romayne's and I'm sure that if Oscar wasn't a grouch, he'd be pleased with his portrait. Do stay clear of the lightning, we want to see more paintings.

Every painting is just fabulous. I tried to bid on one the other day but lost it. :( Thanks for sharing these with us!

Do consider the living room window... I am so glad the lightening didn't knock you out ... Both paintings are wonderful! Thank you!

Love Oscar the Grouch!
I had an Oscar that started out little and got very large. Great personality.
Great little painting.
And isn't it fun to be recognized? :)