What a beautiful day it was today. I know that because I spent most of it driving an hour from my house into the Twin Cities to return a light at National Camera... and then home... and then back to National Camera... and then home again! I saw the beauty out the window, all afternoon. This is what happens when you start using a new wallet that looks just like your old wallet, which you grab in a rush as you're heading out the door to the Twin Cities. Opening that wallet at the 'Customer Service' counter, I was surprised to see that there wasn't a driver's license, credit card, dollar bill or anything in it that would facilitate returning the light I drove all that way to return.

Tonight I drove to Balsam Lake, WI about twenty minutes from here. It's a nice, clear typical Wisconsin lake with little bays full of pontoon boats, lily pads and homes spread around the banks. I had a plan to paint light from the houses and boat docks reflecting onto the water's surface.

A side note... If you think that painting lights on houses at night is easy, have you ever thought that those same lights are controlled by the people inside who might be going to bed long before you are? The things I'm learning by doing this nocturne painting event are numerous. Just as in the day time, light changes, but at night it's not due to the earth's rotation, it's due to businesses closing or house residents calling it a day.

Back on Balsam Lake... the other thing that I didn't think about is that on Wednesday night, in September, many of the people who turn on the lights of the cabins lining the lakeshore are not there! They're in Minneapolis or St. Paul and probably won't be there until the weekend!!! I learn something new every day that I had not thought of the day before. 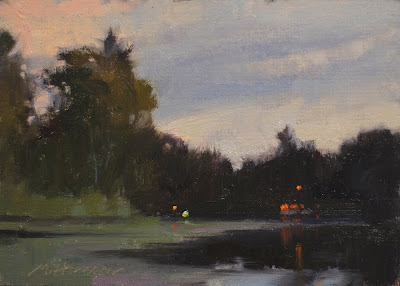 SOLD
9/9-1 'Returning Fisherman'
Maybe not a nocturne of the 'dark' variety, but painted 30 minutes past actual sunset, civil twilight, and very dark though the sky was still light. I blocked in the land mass, reflections and lily pad masses and was waiting for a little bit for things to darken. The sky just stayed light for a long time, so I painted it in. Just as I was about to wonder where the focal point was going to be, there were some warm lights on the distant shoreline that could have been used for that, a little Lund fishing boat came around the corner of the point (similar to the Taylors Falls Queen last week) and became the perfect focal point with it's warm light on the stern and the green light on the bow. The guys in it pulled up and out of the water and walked over to me and said "If you don't mind me asking, why are you painting at night?" I didn't know what to say at first and mumbled something incoherent that they'd probably expect and artist to sound like. Then I said "Well I paint a lot in the day time too..." I don't know, I just can't explain everything! 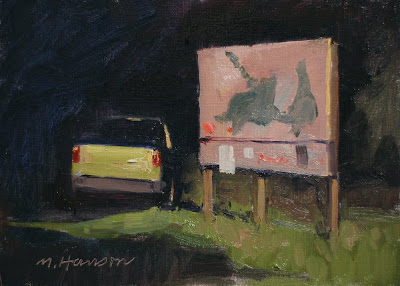 9/9-2 'Balsam Lake-You Are Here'
The second painting was to be my legitimate nocturne for the day...er... night. I waited for "real" dark, and just as I was getting excited about the lake scene in front of me, the nuclear powered street light ignites and the entire lake environment vanishes behind a veil of airborne particles, bugs and moisture lit by the mercury vapor beast on the pole behind me. The idea to paint the reflections on the water are over at this point, I can't see them. So I turned left and see my +270,000 mile Ford Explorer Sport Trac parked next to the topographical map for Balsam Lake and I decide to paint that... because it's all I can see.
Posted by Marc R. Hanson at 10:03 PM

Returning Fishermen is great -- it feels Russian to me.

The only way I know to really eliminate glare is to put polarizing gels or filters in front of your lights and then one on your camera lens.

I have also had limited success with an overcast day and a long exposure.

Thank you. I was just looking at ordering some polarizing gels from B&H Photo after talking to the guys at National Camera yesterday. They don't sell them but said that combined with the lens polarizer should help a lot, just as you say. Appreciate the advice.

Why not just use some tissue paper over the lighting/flash/whatever as a diffuser?

Doesn't work Eugene. The light I bought and returned was a pro studio light with a large diffuser attached to it. The light, no matter where or what it is, still is light and that reflects off of the dark, wet paint surface.

The polarizer gel filters on the light is the only way to solve this... I've tried everything else I've read or has been suggested.

Shooting outside is good, but when you live in an area that has 'weather', you can't count on that when you need to shoot. That's the problem.

I love all of your work, but I especially love your nocturnals. I remember watching you do one when you came to upstate New York and I was in awe.

I haven't gotten the nerve to try one myself, but I will some day.

I am loving following this. You are doing a great job of this project, including showing plenty of flexibility & ingenuity.

For Patty and any others, just try it. I did quite a few failed nocturnes before...surprise, surprise...one worked! And I've been painting them ever since with varying degrees of success.

Actually, Marc, this is more fun than painting them myself! Your work is beautiful.

What a beautiful painting Marc you really are creating some lovely nocturne paintings.