Duty called today and took me away from the computer so the post for last night's paintings is just getting up...

What a night! Temps near 70ºF at 9pm!!! The winds were out of the SE at about 11kts gusting to 15kts. The temperatures will be warming as the night matures. The moon is at 95% illumination.

My basic approach is to find a pull off on one of the gravel (county) roads near me and get set up just before sunset. The last few nights I've been sitting on the tailgate of my truck. Tonight I painted the moon rising at Twilight, and then again about an hour past Twilight so that the full illumination of the light of the moon was in play. Between the early painting and the later painting I sit in the brightening dark (that's an odd thing to see happen) and listen to the sounds of the quiet, waiting for the land around me to brighten up as the moon takes over the show. It's interesting to do that. As soon as it gets dark, critters start moving around you. Last night a skunk passed by, that was obvious, and other 'things' that aren't identifiable by sight are heard to be moving about in my area. I just sit quietly with lights off and try to feel a part of it all. It's spectacular! 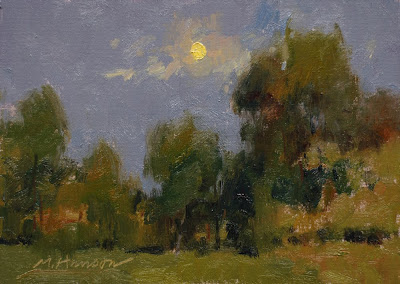 SOLD
9/20-1 '95% Moon'
This painting was so interesting to paint because the last light of the day, the sun, was still throwing some warmth from the western horizon ( to the right on the painting ) onto the scene. At the same time the moon on it's way up, the darkness advancing, created a beautiful gray quality to the land. The wind and warmth was accompanied by a lot of moisture in the air. This affects the color, even the color that is very close. Tonight's sky was a very grayed color, the trees green was very grayed, the flatness of the land and grasses also very grayed. All of this is what made the brilliance of the moon itself stand out and dominate the scene. 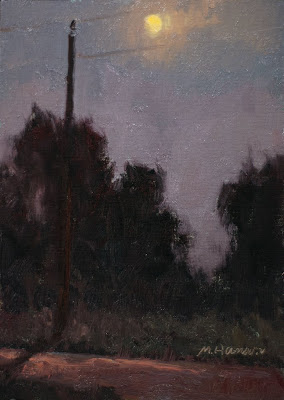 SOLD
9/20-2 'Warm Southern Wind'
I can tell you that I am a lucky guy to be doing this, but I can't share that feeling as well as I'd like to. My hope is that you will feel my own joy at being here, doing this in the paintings. Tonight was one of the best.
Posted by Marc R. Hanson at 9:59 PM

Man, the joy comes through!

Warm southern wind -- is great. Those warm touches on the pole and road are perfect and the edges are ... sublime (not a word I usually use -- but it fits). Excellent work.

Marc, I loved reading your description of your experience. Fantastic paintings as well. I'm really enjoying this series.

The moon painting is especially lovely as the light is hitting the trees and creating warmth.

ulattentLove, love, love these nocturnes! Did you scout places ahead of time or are you just driving untill you see something?

Marc, that weird word is not some foreign languade you need to look up in the dictionary,its the word verification. Should have previewed before I posted. Oops

My favorites so far!!!

Daroo... Thank you. I loved that night, glad it made that impression.

Caroline... I appreciate it.

Hi Anne... Haha... darn computers! Thank you...
I don't exactly scout ahead, but I might go somewhere I know that has the type of thing I want to paint for the night. Thing is that what it is in the day light is not what it might be in the dark. So I'm always a little in flux because what I think might be an interesting subject, sometimes isn't in the dark.

Several times I've set up, gotten the paint and all out and then packed up and moved because it just didn't work out.

Both of these are wonderful... I particularly like the first one with the warm greens and the moon in front of the clouds, enjoyed seeing it as the profile picture on your new FB Artist page. It's great to read your comments about these, Marc. Your joy and excitement are coming through.