My nocturne painting adventure ended two nights short and with more adrenaline coursing through my body than I needed! Im fine, no injuries to anything other than a deer and my truck.

Last night I was on my way from Stillwater up to Marine on the St. Croix to set up for some nice painting in the quaint little village of Marine. About 4 miles north of Stillwater I was intercepted by a young 7 or 8 point whitetail deer buck who came at an angle from my back left side and made a direct line for the front of my truck. I know not to try to miss them, that leads to ditches or worse, like a serious encounter with oncoming traffic. So I hit the brakes and kept it on a straight track, couldn't stop in time and caught the buck's hind quarters with my front right quarter.

The impact was so loud that a nearby resident came down on an ATV to see if there had been a head on collision. He said he was in his front yard on a nearby hill and it sounded like an explosion! Unfortunately the deer was seriously wounded and the on the scene state trooper and sheriff deputy had to dispatch the deer. Some people from the area stopped, to see if there was the possibility of free deer meat I'm sure, and asked if they could tag the meat. I said sure, the trooper gave me the appropriate DNR Car Kill Possession slip needed, and the people loaded the animal up and were off. So despite it all, some good came of this because I think that they probably get a lot of their meat this way and need it. Not for me, but good for them.

This ends my nocturnes for the month. I have a rental car for now and I AM NOT TAKING IT OUT ON THE ROADS ANYWHERE NEAR DUSK, DARK OR DAWN!!! :)

But... Here's my plan... I'm going to be painting in Provincetown, MA for about 8 or 9 days coming up shortly. I plan to paint some more 5"x7" nocturnes there, and some daylight pieces that are the same size and am going to keep posting here and on eBay if I can take some decent photos of them.

Same plan in terms of the eBay details. If you're interested in following any of those, stay tuned to the blog in the upcoming couple of weeks.

Tonight I'm going to get caught up on some bookwork, equipment preparing for the trip and that sort of thing.

Then I'm going to open a good bottle of red wine and enjoy a nice peaceful dinner and evening without the drama of last evening in thought.

I'm also going to try to catch up on blog replies. A HUGE Thank YOU to all of you who've followed my progress this month, and to all of you who purchased the paintings from the September Nocturne Marathon. I'll write up some thoughts on it soon. 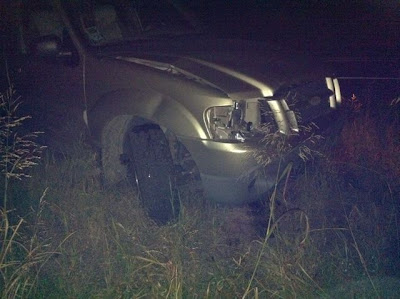 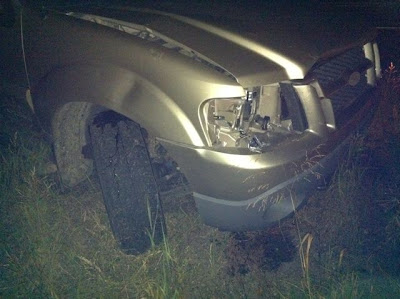 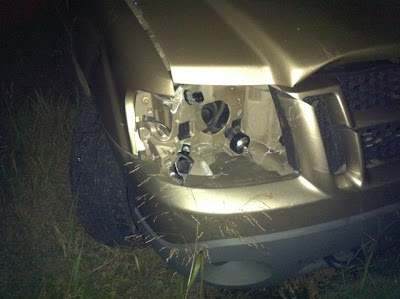 Bummer
So glad you are alright, except for the drama trauma.
I'll keep following to see what you bring back from MA.

Take care of yourself, you should carry always with you a good piece of turquoise , it protect against accidents

you must take care while out driving!!hope you are all right!!And good weekend!!

Oh my goodness! The hazards of plein air painting! I just stood (accidentally) in an ant hill today when I set up outside by a local lake, which was annoying until I realized what I had done, but nowhere near what happened to you! Sorry for your accident but happy you are okay!

Not a good way to end the month. I'm glad you're okay.

Glad you made it through okay. You did beautiful work this month.

Oh, wow.
When I saw the thumbnail of the truck, I thought, "Oh what lovely muted tones in that nocturne painting, and very different subject matter."

geeeez...glad you are OK and the locals have a full freezer.

I hit a deer just past dusk on a rainy Oct. evening. It did about the same kind of damage, but to add to the trauma, it flipped around after I hit it with the front end and slammed into the back panel as well! I have to drive next weekend...at dusk....deer terror is still with me! Looking forward to your new posts.

Now that's what I call going out with a bang! This endeavor has been full of personal challenges for you, with illness and now the accident with the deer. I have really enjoyed the beautiful paintings that you have created this month, and am very glad that you came away from the accident injury-free.
(I also thought the photo of your car was another nocturne!)

How awful about the deer, but so glad to hear that you are alright.....who would have thought that painting at night would be so stressful!

So enjoyed your paintings this month but was sad to see it finish with such a bang. Could have been so much worse the car will fix...looking forward to your next painting challenge :))

Marc, my brother lives in MN and does a lot of driving at night in rural areas. He has some sort of deer warning whistle mounted on his truck that makes a sound that deer and other animals can detect. He's never had a problem with deer since.

I really enjoyed following your nocturne adventures...glad you are okay!

Sure sorry about the mishap. Glad you're ok. Relax and take some much deserved time off.

I had a similar experience last March. After a three day painting trip in southern Utah, I was driving home late at night when a mule deer ran in front of my car. Like you, I didn't swerve (not good to swerve suddenly in a SUV.) I hit the brakes, then I hit the deer! The accident caused over $4200.00 in damage to my poor 4Runner, and killed the poor deer. Funny thing was, even though the mountings for both headlights were smashed, the headlights still worked! The lights sat loose in the crumpled front of the car, but were generally pointed in the right direction, and didn't fall out, so I was still able to drive the rest of the way home. I call the paintings I did on that trip my $500 deductible paintings.