Pretty nice again today. The subjects today are varied. I don’t know why, they just ended up that way. This project is like being on a hunt. My quarry is something interesting to me, that’s it’s only identifying characteristics. Some days I feel like doing nothing but looking at roads and the paths they take, others it’s ponds. The sense of discovery is one of the aspects of being a painter that I don’t know that I could replace by another occupation. I did find that same sense of discovery in flying at one time thought that I could be as happy as a bird, no pun intended... well yes it was. But when I talk to pilots who do it for a living, it sounds like that sense is replaced by the responsibility of the job and sometimes that takes over and diminishes the excitement and wonder that discovery brings to the table. Painting has never, ever lost that quality no matter how hard it’s been economically or as a student of the art. It’s always new and never looses it’s ability to challenge my ability. See, once a pilot always a pilot and good luck trying not to get us to talk about it! 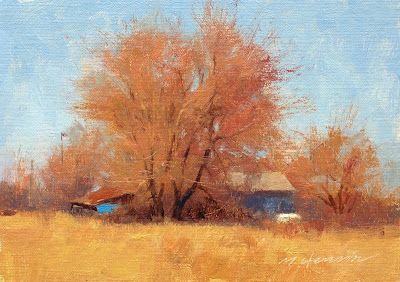 “Two Blues” oil, 5x7 © Marc R. Hanson 2009
The willows are starting to get some color, all the trees are actually. I saw this orange/blue color scheme this morning and decided it was fair game. The two blues were so very different from each other. That’s what caught my attention and why I decided to paint it. It’s almost always more than painting a ‘pretty picture’. For artists making art is about exploring why we think the way we do about things visual, for some about things that we express in a visual way. I’m a ‘reactionary’ painter. I see things in nature and those things cause me to react, using paint to express that reaction. No messages other than “Damn, I love this planet!” 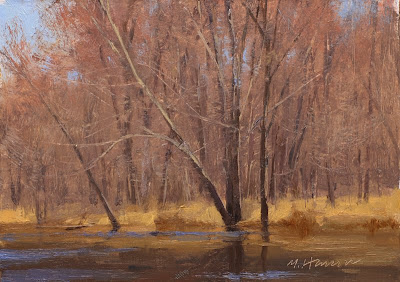 “O’Brien Spring” oil, 5x7 © Marc R. Hanson 2009
A quiet mid-day at William O’Brien State Park, along the very high St.Croix. This was a peaceful place to be on a nice sunny day. I could sit and watch the calm, slow moving reflections of the trees and warm grasses all day... If I didn’t have so many paintings to do that it. 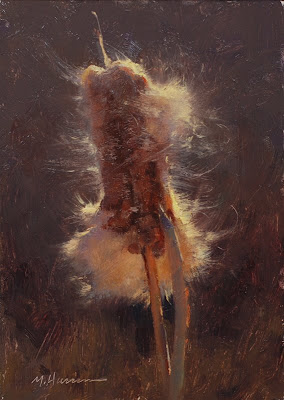 “Fluff” oil, 5x7 © Marc R. Hanson 2009
I ended up at a little pond south of my house in the second half of the afternoon. While scouting the pond, looking for what I might do with it, I turned around and here are these cattails from last season, all exploding seed into the wind. I gave up the pond idea and found myself in the swamp weeds face to face with “Fluff”. It was a nice change of pace to the day. 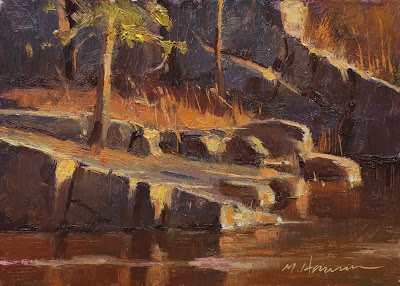 “Another Day On The Rocks” oil, 5x7 © Marc R. Hanson 2009
I’ve been here as you can tell. The rocks are growing! Or the water is dropping... the latter I would bet. I bit off a bit more than the light in the canyon would let me chew on. In the end, I moved at faster than normal speed and managed to capture the warmth of a warming spring end of day. I met some nice people while painting here who are going to check into the website to see if I actually finished this... I hope that they like it.
Posted by Marc R. Hanson at 10:47 AM

"Fluff"...I still marvel at that painting a year later. I'm sure you sold the original, but if you ever were to make prints...I'd buy one!