Okay, change of plans! My goal is 120 paintings for the month of April. Four per day worked up to last weekend when I had a three day workshop to conduct. I’ve been intending to slip in an extra one or two per day until the 12 missing paintings are made up. That hasn’t been going well. The days have been tough in general and I haven’t been able to fit in the extra ones. That was until today. Most of the day was perfect for painting with only the last couple of hours taking a turn for the worse. I’m in now because of rain and thunderstorms, but had a good day. Rather than wait to post these like I thought I would do, I’m going to post them as they’re done. So today there are seven paintings. 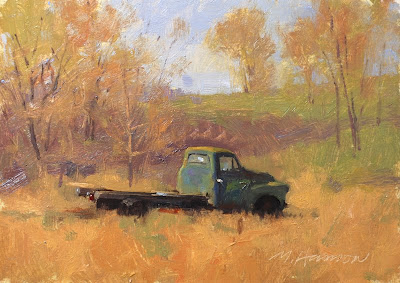 “ ’42 Chevy” oil 5x7 © Marc R. Hanson 2009
I found this beautiful old truck and had to paint it. The land owner was extremely kind and has given me permission to access his farm and his dad’s farm. He has a collection of ‘yard ornaments’ as he called them, including about 5 or 6 old, I mean really old as in a horse drawn road grader, tractors and things like that. 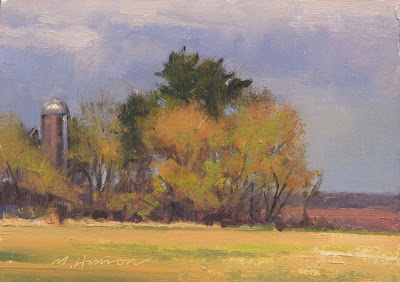 “Single Silo” oil 5x7 © Marc R. Hanson 2009
After painting the truck, I turned to the left and saw this single old silo, no longer accompanied by a farm house, barn or any other buildings from the past. It’s still used and in good shape and the color of the surrounding trees made it an art form this morning. 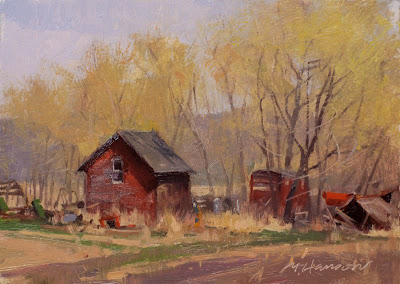 “Friendly Old Dog” oil 5x7 © Marc R. Hanson 2009
This is a gold mine of yard ornaments! I was greeted by two dogs, a large hairy, burr ridden ‘friendly old dog’ and a yappy Boston Terrier. They both became my buds as I painted, but the old dog stayed and laid down under the tailgate of my truck while I worked. Once in awhile he’d get up, snuggle against my leg and offer me a paw for a shake. Nice dog. 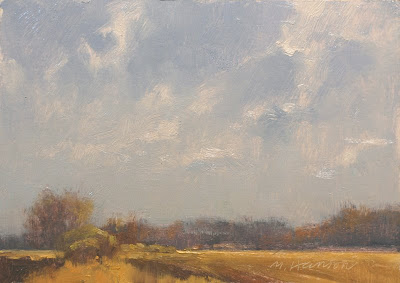 “Distant Thunder” oil 5x7 © Marc R. Hanson 2009
The first sign of what was to come later happened around 3:00 pm or so. The sky all afternoon was the inspiration for nearly everything else that I painted. All I needed was a little bit of a foil to show it off, as in this one. 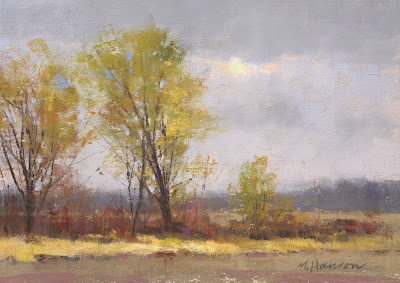 “ Leaves!” pastel 5x7 © Marc R. Hanson 2009
This is a pastel! I might do more of these but the weather has to co-operate as in no heavy wind or rain. They’re actually more difficult to do at this size. My fingers are way too big and get in the way on these small ones. 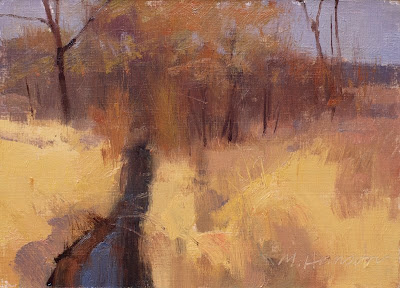 “Little Water” oil 5x7 © Marc R. Hanson 2009
Driving along and who-o-aaa! I’ve driven this road a dozen times two times and never have seen this little creek. Maybe it’s the changes of the season showing me more, and the gray of the sky today. But this was beautiful. I didn’t spend too long on it, I thought that my day was about to be cut short. 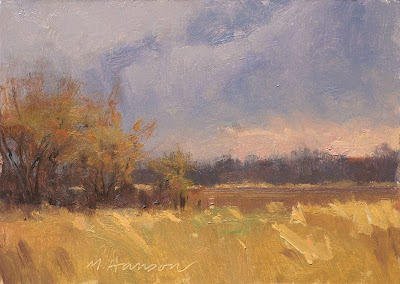 “Barely Time” oil 5x7 © Marc R. Hanson 2009
The title refers to the impending storms. I had it all around me and the wind all over me but managed to finish and get home just before it all hit. Not really as bad as the forecasters said, but wet enough and plenty of lightening. Again, the sky.
Posted by Marc R. Hanson at 6:29 AM

Beautiful work as always!! 120 paintings? You are officially amazing!

Marc, these are all so very good!
Wow!

Hi Marc.
All paintings are beautiful and amazing. Well done, and all the best.
Vic.