April 3, 2009
At the start of today I was thinking that I’d have to drag out my tube of ‘grey sky’ color once again! I followed the weather report and it said that the sun would be out in Minnesota except north and east of the Twin Cities. That’s pretty much where I live. I wasn’t putting up with that. So I took the truck south towards Stillwater hoping that I’d get an extra hour of that warm friend. Until noon it was grey there too. But then the sky opened up and despite needing to wear the same amount of clothing as I have since this thing started on Wednesday... Man did that sun feel good! I’m not complaining, but the added little bit of warmth was Welcome!!! 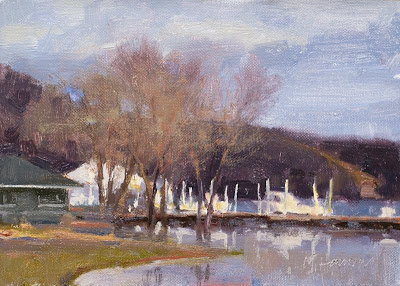 ‘High Water’ © Marc R. Hanson 2009
While waiting for the sun to come out I went down to the flooded waterfront in Stillwater to warm up. The entire walkway and park is under water. So that’s different than normal and the colors this morning were quite rich and attractive to me. This was a quick one, just under 40 minutes. 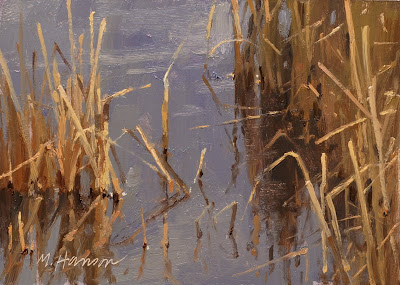 ‘Dancing Reeds’ © Marc R. Hanson 2009
I love the rich color in the water along the edges of ponds at this time of year. The water reflects the color of the sky but is tempered by the color of the water and the depth of the water. Shallow water darkens the value because you can see into it, the bottom color modifies the sky reflection. The result is usually a very rich, dark color. Add in the light, warm color of the reeds from the previous season and there’s compliments and value contrast galore to have fun with. As I painted and observed this scene, I had the impression that the reeds were moving about, almost like thin legged dancers on a stage. 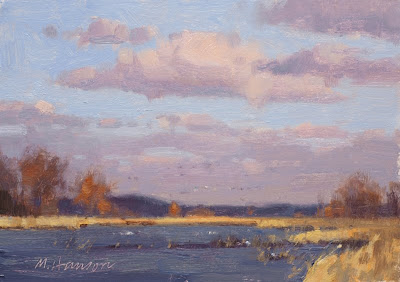 ‘Duck Playground’ © Marc R. Hanson 2009
Beautiful cerulean sky with light violet clouds cutting into the horizon of the sky. Ducks, Eagles, Loons all sounding off in the marsh. Sounded like they were having a great time, and so was I. 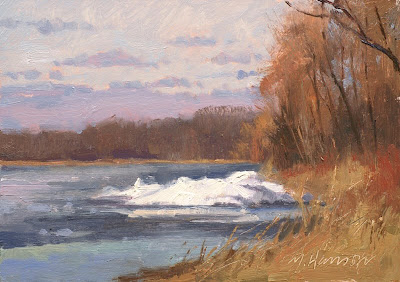 ‘Berg!’ © Marc R. Hanson 2009
I visited a large lake in the afternoon that was still icebound. But what a treat it was! This place was full of whooping swans, sandhill cranes, geese, shorebirds, and a bunch of eagles out fishing in the open pockets of water. The entire time I was painting, I was hearing the ‘wooop- whhoooop’ and the paddle like splashes of their enormous feet as they went through courtship activities. The painting subject caught my eye because it was the only snow of any amount along the shore and really stuck out like a sore thumb. I like that kind of contrast.
Posted by Marc R. Hanson at 9:30 PM