I painted with Kami this weekend and we had a blast being in the warm spring air. We first did some driving before settling in to a little spot (that I discovered last year during my April project) on Saturday evening. It was a quiet, no traffic and lot's of critters making sounds, kind of place. We both found that the color of what we saw looking down towards the water was more than we needed to paint. Sunday morning we went to Kami's dad's farm north of Stillwater and found plenty to paint there too. I find that in the spring the dried grasses and their reflections are richly colored subject matter to work with. There's almost a monochromatic palette at this time of year, but one that is keyed with rich color and a warmth to the palette that is extremely interesting to paint once you set up and begin to examine it's beauty. 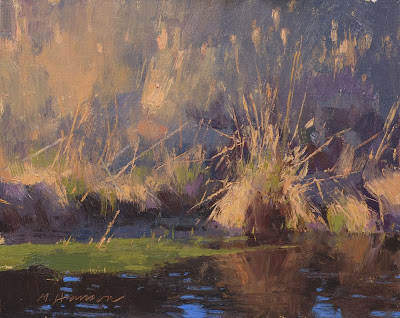 'Hummock's' oil on board, 8x10 © Marc R. Hanson '10
I like the word 'hummock'. Always happy to find one to paint. ;-) Well okay, the color was a mind blower too, another reason to paint it. And then there was the shapes, the nice weather... Do I really need to explain the 'need to paint'?
We went to a Wisconsin State Fish Hatchery near Dresser, WI to paint the marsh. Last April I painted here all day on Easter Day, it was so intriguing. Kami found it to be that way too. So we'll be going back for more. 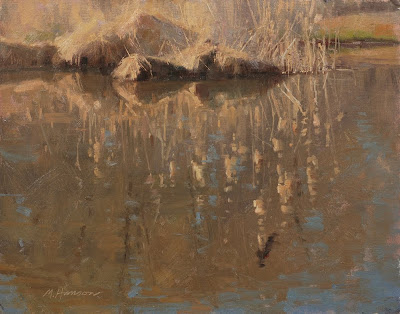 'Red Wing Reflections' oil on board, 11x14 © Marc R. Hanson '10
This was Sunday morning at Kami's dad's farm. He joined us for some conversation and in doing that got ahold of Kami's camera and was off and running. I think that he's an artist/photographer at heart. I suggested that he document the land that he loves so much and publish it as his thought on it's beauty. Hopefully he will.
The day was warm and bright. I stuck to the grasses and reflections idea but took it one conceptual step further. The entire time we were serenaded (rather loudly too) by way too many red winged blackbirds... can I say "Noisy!"? I came up with a concept to show one on a cattail, but as a reflection, not as the bird being reflected. It could really use more of the stage, but I also liked the idea that it competed with the actual shoreline grasses, as seeing them does in real life. They are dark, the grasses are light, yet they are hard to see unless they move, even with those scarlet epaulets blazing away their announcement that they are 'king' of their territory.
Posted by Marc R. Hanson at 9:59 AM

nice light, I love the hay in that top one!

Beautiful as always. Evidence of why your are one of my favorites!

Hi Michael. Thanks so much.

I appreciate that very much Jason. Thank you.