Today might be the day where I’d ask for a ‘gimme’, if that was an option. I can say for certain that this was the windiest day that I have ever painted in. I don’t know if the forecast gusts of 45mph were accurate, but I do know that today made the day when I painted the flags seem calm. There are no architectural pieces today, other than the distant farm buildings in one, because there was no way that I was going to be able to draw a straight line while constantly being blown off balance, confronting a tipping tripod or shaking paint box and brushes that were possessed! I write this as my daily reflection for interest, not to complain daily, though it might seem like that. But... remember yesterday’s comment... “Today was... peaceful!” I’ll take that again, thank you. 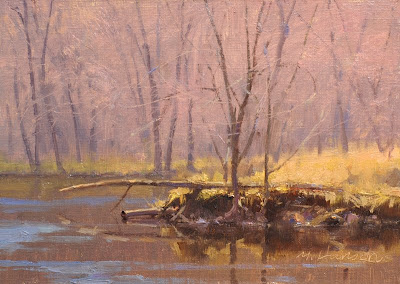 “Backwater” oil 5x7 © Marc R. Hanson 2009
The water is dropping along the St.Croix now. I thought that if I dropped down into William O’Brien State Park and the river’s edge I’d avoid the winds this morning that were picking up already. The trees broke the gusts somewhat. 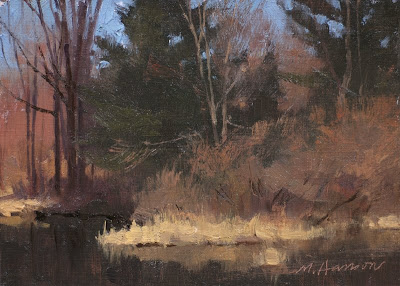 “Dark Water” oil 5x7 © Marc R. Hanson 2009
There was an eerie, hazy light today that blanketed every thing up here. If I can remember my weather from flight training, when you get these incredibly high winds a lot of debris like dirt and water vapor is taken up into the atmosphere and the result is almost like having a translucent shade covering the sun. If you’ve ever been outside during a solar eclipse and seen the weird light of one of those, you’ll understand the type of light today. Very similar. No strong shadows, forms somewhat dissolved, but lit. 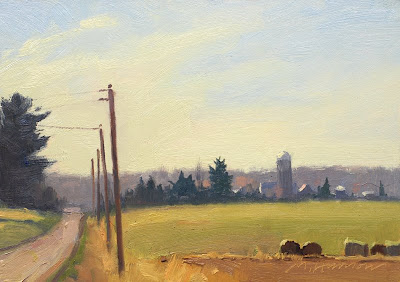 “Greening” oil 5x7 © Marc R. Hanson 2009
Yes it is! This scene attracted me because of the very light value but warm sky and how fast forms cooled as they receded. Honestly, it’s the hay bales that caused me to stop. 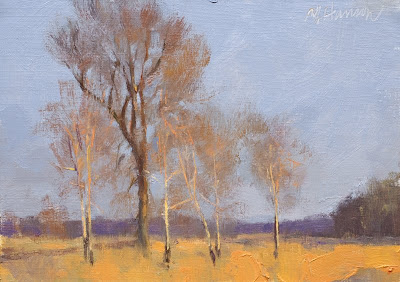 “Darn Near Airborne” oil 5x7 © Marc R. Hanson 2009
The end of the day was the windiest period. I’m serious about being airborne too. I had my tripod legs splayed out to the point that they had about a 6 or 7 foot, foot print. I had to hold the easel with my hand the entire time that this one was painted. At one point the wind twisted the paint box in the tripod clamp and started to unscrew the adaptor that affixes to the bottom of the box and then is clamped into the tripod head. This scene is a great one and I’ll be going back when I can actually draw out the myriad of birch trees and this old cottonwood.
Posted by Marc R. Hanson at 6:29 AM

Are you able to paint all of these 5x7 panels in one day? Wow! I can only paint one or two 6x8 or
8x10's. Maybe I will go a little smaller. Last year I was painting 3x4. They turned out great as they are small enough to capture light easily. But they are hard to frame. Not many framers will touch anything under 4 inches. The 5x7 may be the ticket! Love your water! You are really capturing those spring trees!

I always enjoy your paintings and the year's of experience displayed in your talent.

How do you do it??? One beautiful painting after another!!!

The word art can describe several things: a study of creative skill, a process of using the creative skill, discount oil paintings, or the audience's experience with the creative skill. The creative arts (art as discipline) are a collection of disciplines that produce artworks (art as objects) that are compelled by a personal drive (art as activity) and convey a message, mood, or symbolism for the viewer to interpret (art as experience). Art is something that stimulates cheap vibram 5 finger shoes, emotions, beliefs, or ideas through the senses. Artworks can be explicitly made for this purpose or interpreted on the basis of images or objects. Although the application of scientific knowledge to derive a new scientific theory involves skill and results in the "creation" of something new, this represents science only and is not categorized as art.