Today was an odd one.  The morning started with us under a heavy fog, one that limited visibility where I am to 1/4 mile or less.   As the sun began to make it's presence known, and the early morning temps dropped as they tend to do as it rises, hoar frost began to coat weeds and branches.  Within an hour, enough sun was making it's way through the moisture near the ground to change the color of the frost and vegetation to a warmer palette.  I began to see a neutral yellow/neutral purple complimentary color color scheme all around me.  By the time I had finished the first two paintings, the winds had picked up, cleared out the fog, but left a ground haze that added measurably to the atmospheric perspective, which I really like to paint.  That's when I painted "Haystack Wind", showing the view south from my studio, out past the 'goose pond' and Haystack Mountain and further on down the Front Range.  Thank the wind for the dust particles and weed seeds in that one!

Then all of a sudden, the skies were fairly clear, the wind was gone, and I painted 'Afternoon Lull'... which didn't last long at all.  The wind switch was thrown again, and the light became ultra dramatic in the afternoon. To the East the skies were a heavy slate blue-gray, the foreground to middle ground areas were a mix of areas in shadow, and areas being slammed by the western sun.  I jumped into my van and raced off to a road not far from away where I knew I could get an overview for many miles, all of the way to Lyons to the NW, and all the way to the plains past Longmont to the east.  While setting up, one of the bluffs north of Longmont was slammed with light while the rest of the landscape was pretty much in shadow.  I had a piece of Arches 'Huile' (oil) painting paper ready to go and spent about half an hour trying to grab just the simple statement of that light effect.  Normally, if I hadn't set the parameter for the 8"x10" size for this project, I would have grabbed a few 5x7 or 6x8 pieces of the paper and painted very fast color notes.  It was astounding!  BUT... the wind was being very nasty, knocking over my gear, getting sand in my eyes, and it was getting colder by the second.  So I said, 'enough'... there's always tomorrow.

I was thinking about how I decide what to paint, how to paint it, what to paint on, and what medium to use, each day.  Actually, I was beginning to wonder what the heck is wrong with me that I do that?  I have no idea why, nor do I endorse this method, but I would get bored to death, especially painting this many paintings consecutively, if I only used one type of surface, only used one medium, Only used one approach to painting, and only painted from a scripted view point.  There is something in me that won't allow me to do that.  As you've noticed if you're reading this blog daily or frequently, some days I am zeroed in on small sections of the landscape, somedays I paint broad views, but loose, or more tightly controlled.  Some days, some of the paintings I put up here are so much my interpretation that you couldn't go find the location, even though I could tell you exactly where I painted them.  There are days when I feel that to keep my level of interest up, I have to only use a little slice of reality as a kick off for the paintings I do of the area.  After all of the paintings this month, I am still discovering more to paint here, it's endless, in my little corner of Colorado.  But, I am being very creative with how I choose to express it all.  Even if I thought that was an odd way to be an artist, it's too late for me... :)

Thanks for looking in... Enjoy! 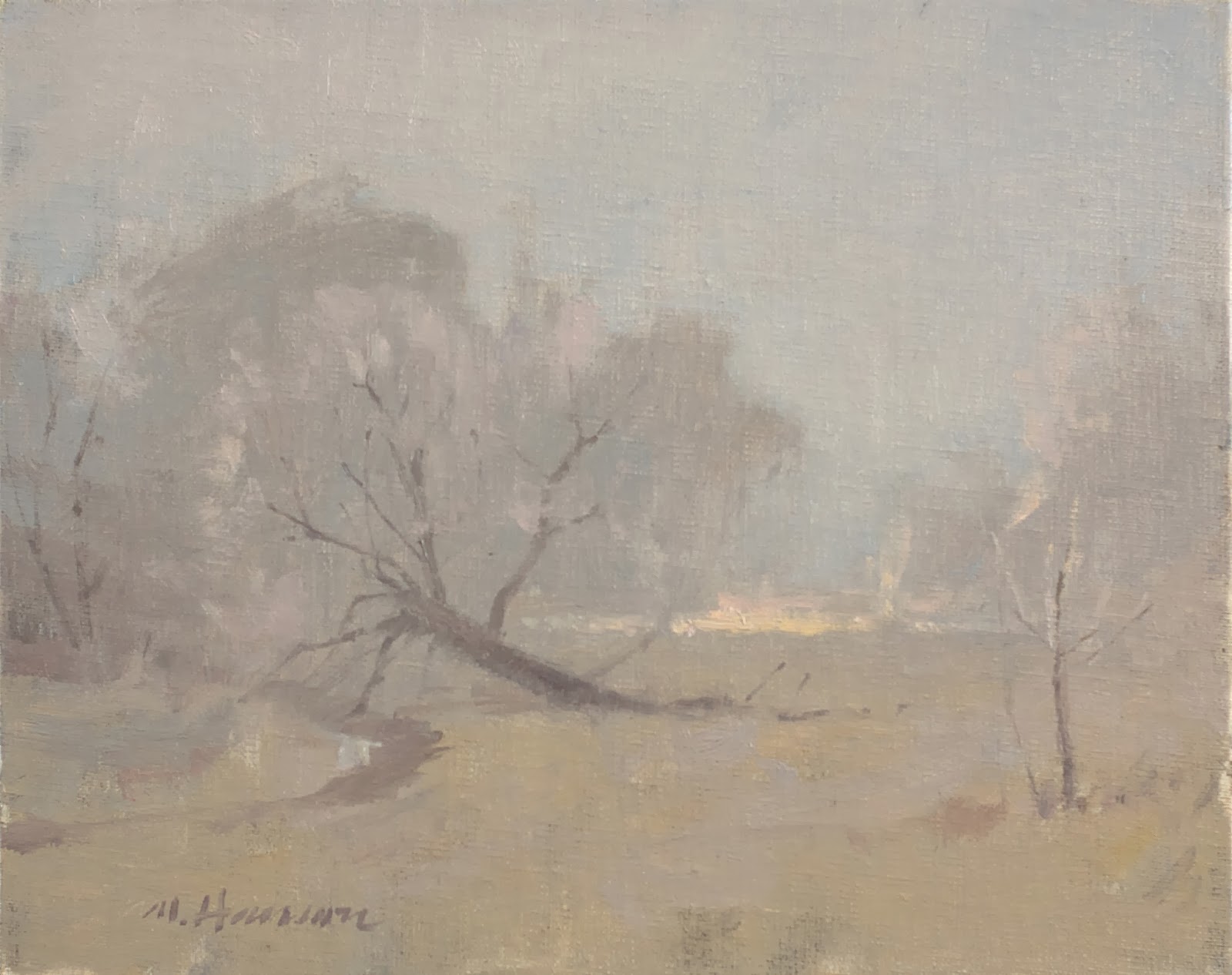 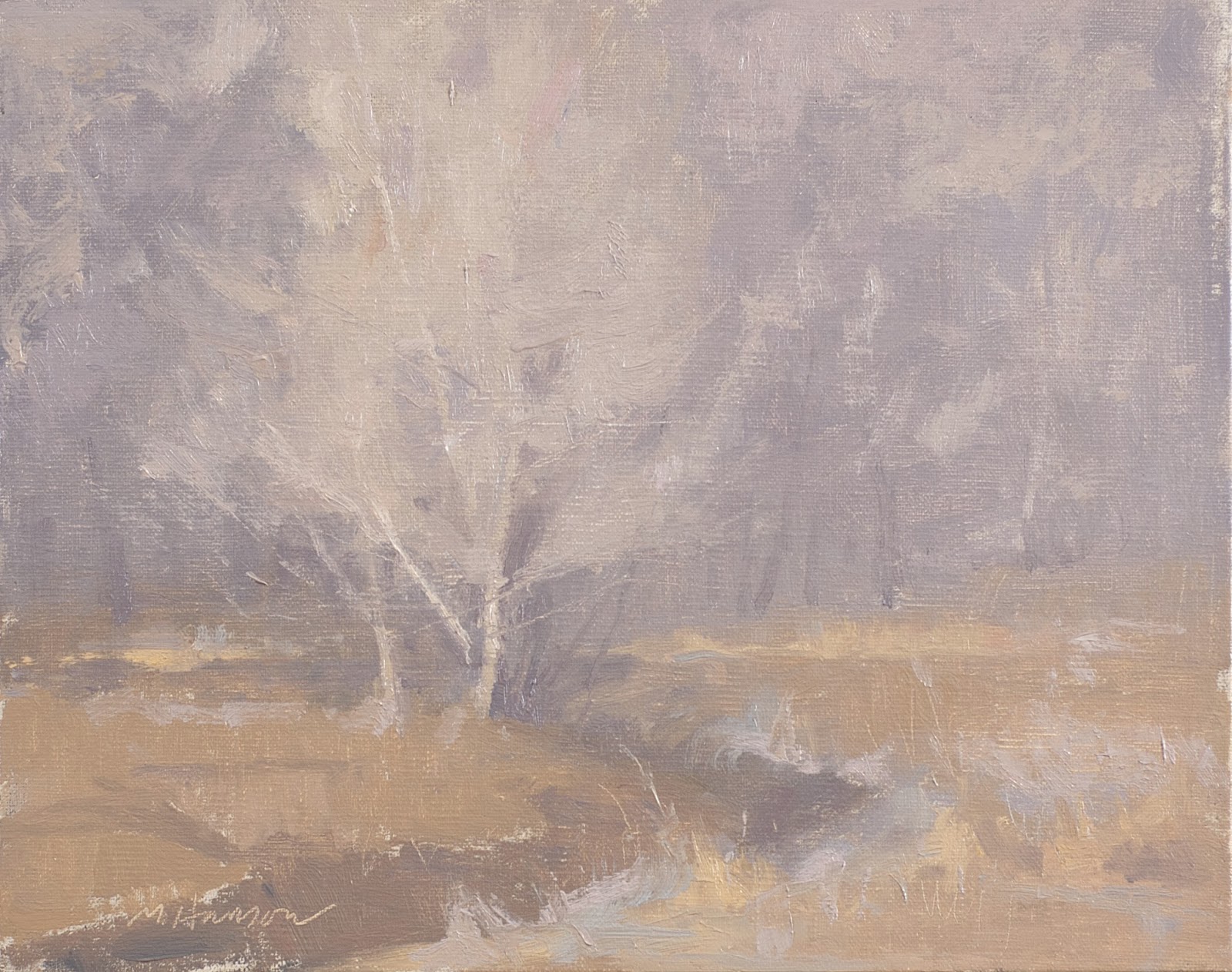 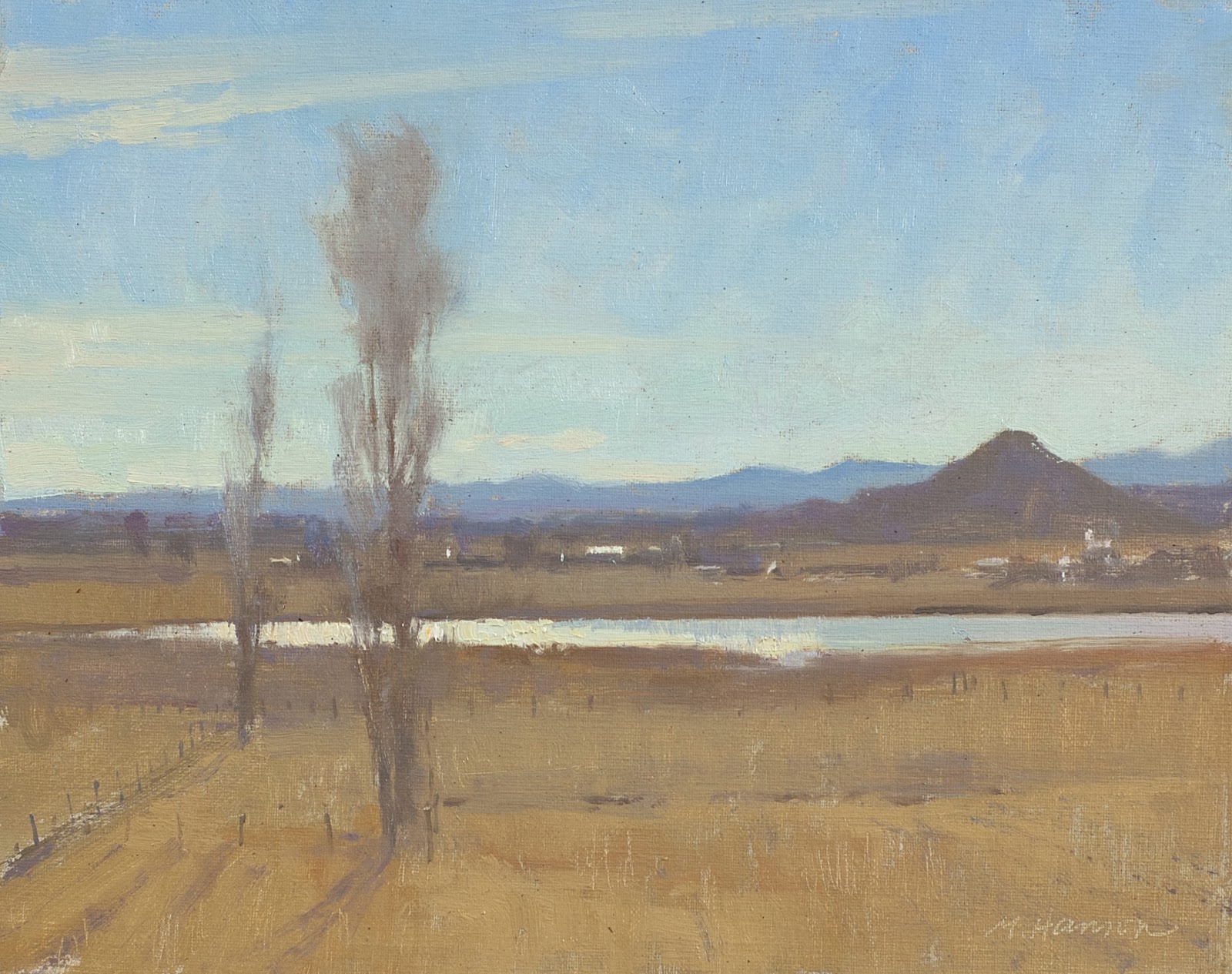 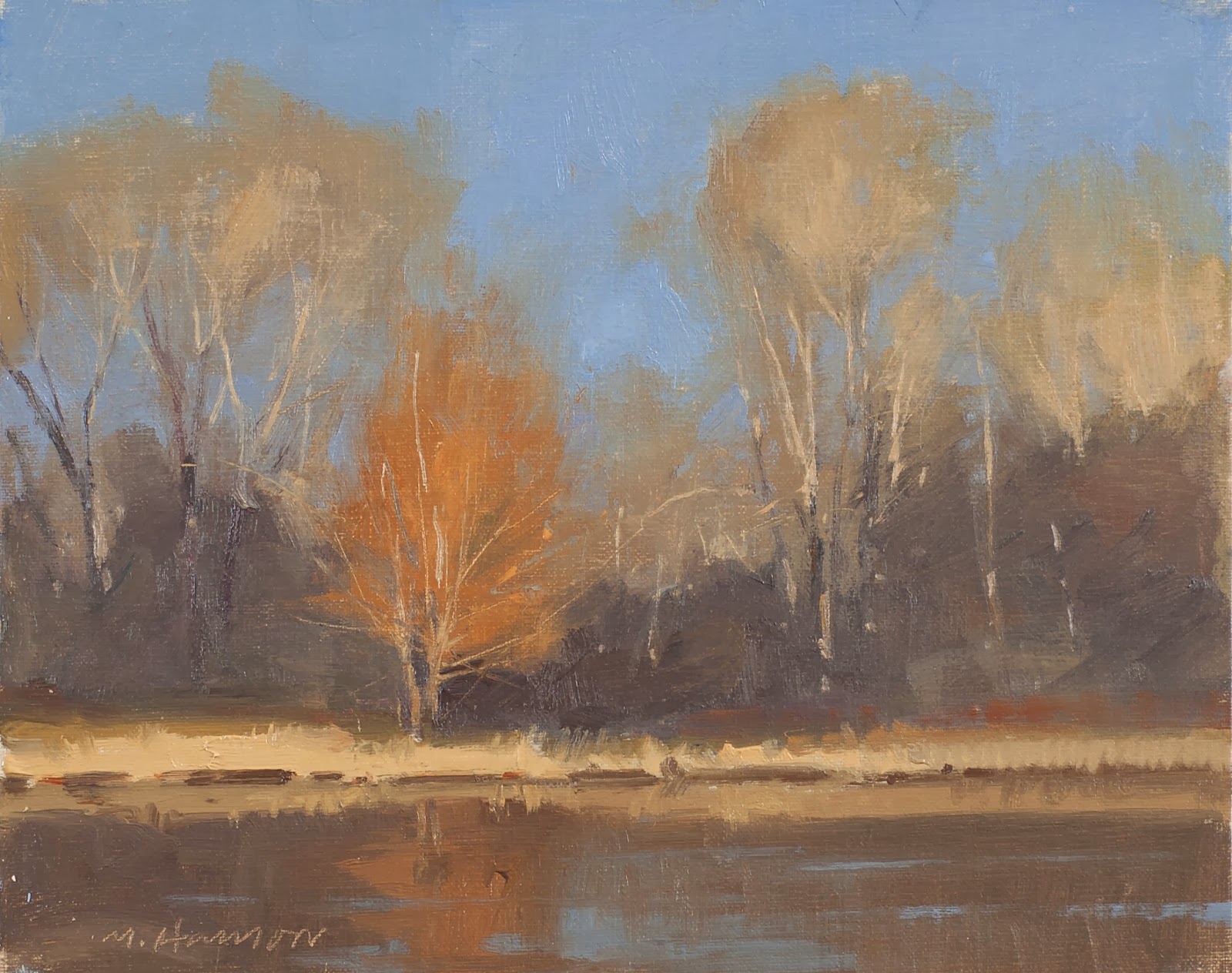 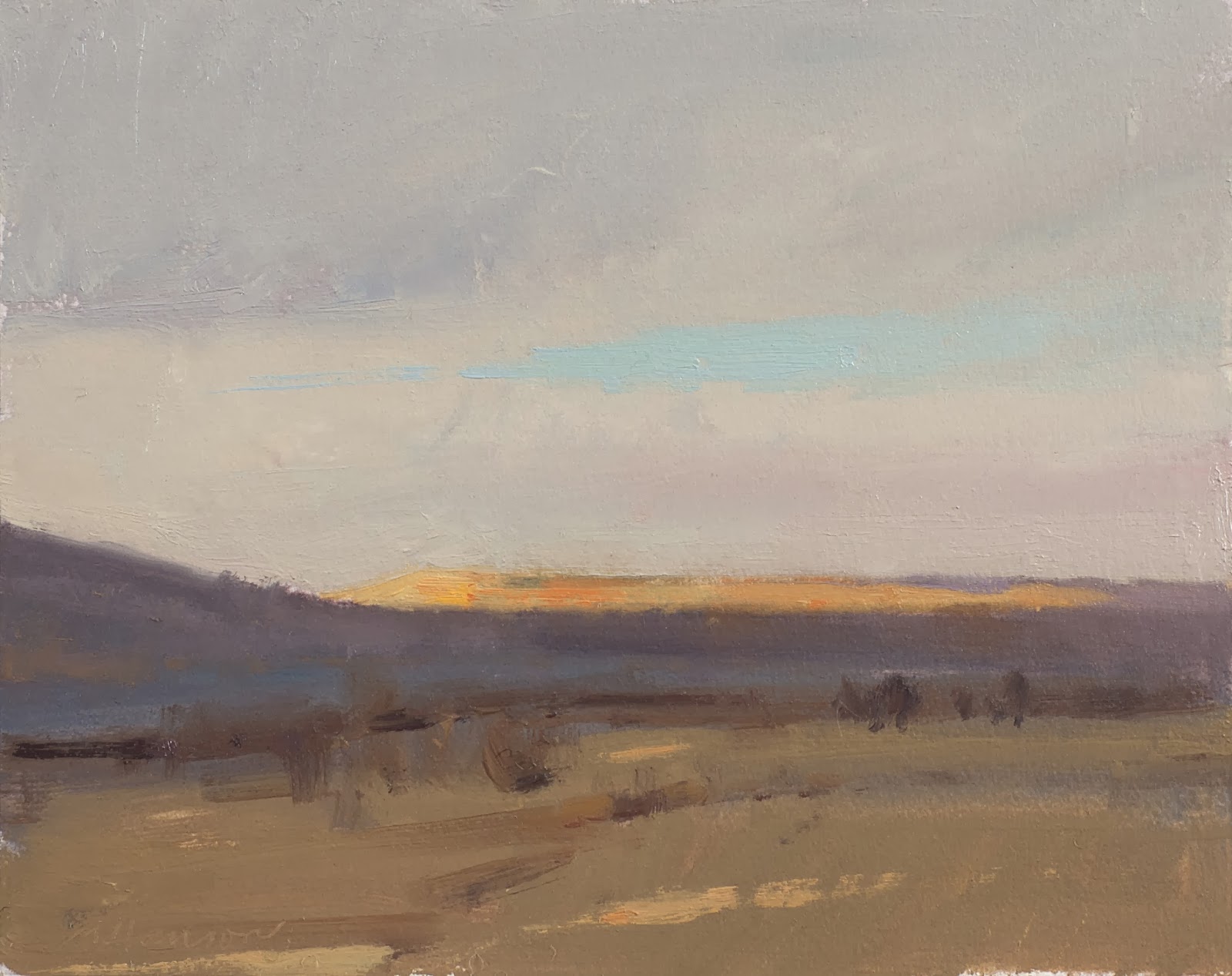 Thank you for sharing this rough and tumble journey with us Marc. Serious accomplishment along with some great paintings. The plein air gods are smiling !

I love the frosty and hazy look of the first paintings. The effect is very intriguing.